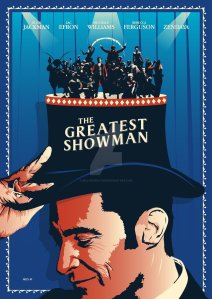 “Nothing draws a crowd quite like a crowd.” – PT Barnum

Brief Synopsis – A young boy living on the street vows to one day make his ideas come alive in order to make something of himself.

My Take on it – This is one of my favorite films from last year and I am so glad to finally get the opportunity to see it again.

The film is presented amazingly and it works on numerous levels.

The music is superb and this is a film that is enhanced due to the musical aspects and choreography of it all.

The songs are quite catchy and they help the story move forward by leaps and bounds.

I have the soundtrack in my car and I find myself listening to it over and over because the songs are so inspirational.

The cast is also amazing and Hugh Jackman was the perfect choice for the lead.

He once again has been able to prove how prolific an actor he can be no matter the genre.

The film’s message is very inspiring and the songs help reiterate that fact over and over.

I was pretty disappointed that this film only managed to garner one Oscar nomination – for Best Song and was even more shocked when This is Me lost to Remember Me from Coco (2017) at the Oscars this year.

I guess I can be happy that This is Me was able to still win Best Song at the Golden Globes.

This is one of the best films of 2017 and IMHO, one of the best musicals of recent years which helps prove that the genre is far from dead and that there are still lots of talented songwriters out there who can bring such stories to life through wonderful music, song and splendid choreography.

Can’t wait to see this again.

Bottom Line – Amazing film that is wondrous to watch from numerous aspects. The music is superb and the songs each help move the story forward in leaps and bounds. The cast is great with Jackman proving once again how great an actor he can be no matter the venue.  The message of the film is so inspirational and the songs help reiterate that fact over and over.  It’s a shame that this film wasn’t able to garner more than one Oscar nomination (for Best Song which it unfortunately lost to Coco (2017) – Remember Me.) One of the best films of 2017 and also one of the best musicals in a long time which proves that the genre is far from dead and can still bring us amazingly put together films like this. Highly Highly Recommended!

MovieRob’s Favorite Trivia –  Barnum’s American Museum was so popular that the crowds inside would linger much too long, thereby cutting into profits. To make way for additional paying customers, he posted signs indicating “This Way to the Egress.” Unaware that “Egress” was another word for “Exit,” people followed the signs to what they assumed was a fascinating exhibit, and they ended up going outside. (From IMDB)