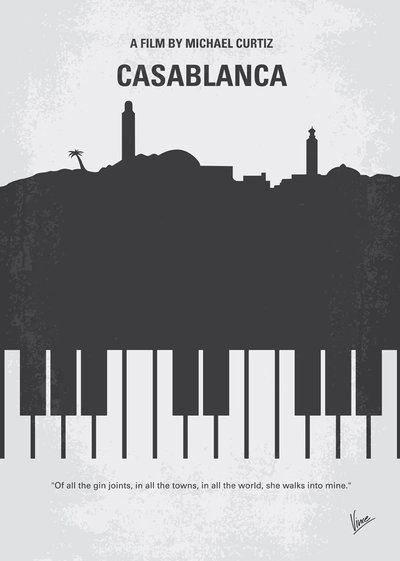 For this month’s next review for Genre Grandeur – Anti-Hero Films, here’s a review of Casablanca (1942) by me

Thanks again to Dell of Dell on Movies for choosing this month’s genre.

Next month’s Genre has been chosen by Tony of Coog’s Reviews and it is Political Thrillers.

Please get me your submissions by the 25th of June by sending them to polithrilltony@movierob.net

Try to think out of the box! Great choice Tony! 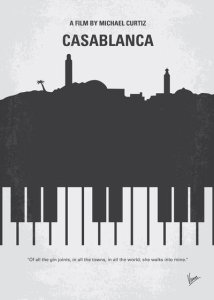 “Might as well be frank, monsieur. It would take a miracle to get you out of Casablanca, and the Germans have outlawed miracles.” – Senor Ferari

Brief Synopsis – During World war II, an American saloon owner in neutral Morocco must decide what to do when the girl who abandoned him years earlier shows up seeking escape from the Nazis.

My Take on it – When Dell chose the theme of anti-heroes for this month’s GG, I had a big problem.

There were too many choices of such great examples and I knew that I still needed to limit myself, so I ended up choosing 5 diverse choices in different kinds of films in order to help emphasize how important such roles are because anti-heroes aren’t always the easiest to spot.

Rick Blane is a great anti-hero because we can see how immoral and corrupt the entire system is and he goes along with it all.

He has learned to care about nothing and now that the love of his life has returned, he must try and decide whether to change his ways and cause trouble for himself or just go with the flow.

His character arc is amazingly laid out for us and we can understand him.

The story is timeless and it could take place anywhere and anytime where there is the need for an escape.

The film’s plot is filled with intrigue and mystery that helps keep things so entertaining the entire time.

The dialogue is witty and I loved the way that the characters would shoot out one liners that were both poignant and funny all at once.

The supporting cast is also great and helps move things along at a great pace.

The story doesn’t stall at all and is constantly on the move and we slowly learn the true motivations of each of the characters even if they not pure and altruistic at any point.

This is one of the best films ever written and still remains relevant after 76 years.

Bottom Line – Blane is an amazing anti-hero character who has a great dilemma and arc that works so well because most people can relate or at least understand his motivations. The story is truly timeless and the intrigue and mystery along the way helps keep things interesting. The cast is superb with Bogart, Bergman, Heinreid and rains all perfectly cast in these roles. The story moves along at a great pace and by the end, we can completely understand the true motivations of everyone. One of the best films ever written. Highly Highly Recommended!

MovieRob’s Favorite Trivia – Conrad Veidt, who played Maj. Strasser, was well known in the theatrical community in Germany for his hatred of the Nazis, and his friendship with Jews (including his Jewish wife), and in fact was forced to hurriedly escape the country when he found out that the SS had sent a death squad after him because of his anti-Nazi activities. Veidt had it in his contract that he only played villains because he was convinced that playing suave Nazi baddies would help the war effort. (From IMDB)