For this month’s next review for Genre Grandeur – Anti-Hero Films, here’s a review of Suicide Squad (2016) – Keith of Keith Loves Movies

Thanks again to Dell of Dell on Movies for choosing this month’s genre.

Next month’s Genre has been chosen by Tony of Coog’s Reviews and it is Political Thrillers.

Please get me your submissions by the 25th of June by sending them to polithrilltony@movierob.net

Try to think out of the box! Great choice Tony! 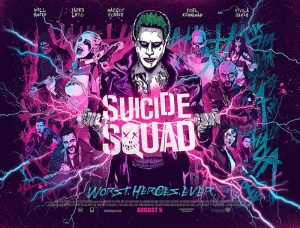 After the dismal reception of Batman v Superman (not necessarily my opinion), fans are hoping that this new entry will put the DC cinematic universe on the right track. It has an interesting concept, focusing on the bad guys and making them the stars. Also the cast that they’ve put to together here is pretty impressive. What’s notable here is the film’s own incarnation of The Joker who is now played by Jared Leto. It won’t be easy to follow after Heath Ledger’s amazing performance in The Dark Knight.

Let’s address the last point I made with Leto’s performance as The Joker. It does not come close to Ledger’s, as we will inevitably compare the two, and maybe that’s a good thing since he is much different here. He looks much different here (everybody has seen some of the pictures) and also has a different behavior and mannerisms. He doesn’t try to imitate other past Jokers and tries to do his own thing. I commend the effort but it didn’t work. He just didn’t seem menacing enough and it was hard to ever take him seriously. His presence had no impact on the plot whatsoever which raises the question of why he was even here in the first place. This isn’t all his fault, however, as he did not get much of a chance with little screen time.

It is definitely an interesting concept here, although not a new one, seeing a team made up of “bad” guys doing good things. The film uses a lot of flashbacks as a storytelling device and they began here as each member of the team was introduced to us via flashbacks, giving us a glimpse of some of the bad stuff they did. All the members that mattered to the film got these flashback introductions but it felt like they could have gone further and shown less superfluous stuff like a point form description of what they are and did. Because of that, we never get a good idea of these characters and the novelty of them being “bad” guys kind of wears away quickly. This fact also influenced the tone of the film in that it didn’t match the personalities of the characters and was weird since it didn’t quite fit with the rest of the film.

The comedy here came from seeing normally “bad” characters as protagonists and having them interact with one another. The problem with this was that the film never really gave them a chance to show us their personalities which would have made things fun. The film was on the cusp of being fun but didn’t quite make it. What was holding it back was some of the humor felt forced and didn’t work by trying to fit the characters’ personalities within the film’s contradictory tone. The highlight of these moments has to be the banter between Deadshot (Smith) and Harley Quinn (Robbie). They had great chemistry from working together in Focus and it continued here. But their relationship was more Robbie than Smith because Smith’s performance as Deadshot did not involve much acting as he was just Will Smith and Robbie’s Quinn was full of energy and a scene-stealer.

The story wasn’t that great and the plot took a long time to actually get anywhere as the film chose to show off the characters a little too much. Once it got somewhere, the film did not get that much more exciting as the villain wasn’t that interesting and rather dull, Fantastic Four comes to mind. Since the film was more about the “squad”, it did not spend too much time developing the villain in Enchantress (Cara Delevingne). This made the inevitable climax not have the desired impact. Since the plot follows the standard comic book film format this and everything else was predictable and a little cliché. You can use your imagination on for that one. This film doesn’t break the mould and it is something that has been done a multitude of times before. The best example of this is the ending which may raise some eyebrows. It chose to play it safe a little too much and did not take too many chances

The best part of the film has to be Viola Davis’ portrayal of Amanda Waller. She was great here as Waller. She was very intimidating, menacing, and sometimes scary. Her larger-than-life presence made her fun to watch especially as she towered over all the other characters. It would have been better if she had more screen time. The Joker subplot seemed too abrupt within the rest of the plot. Because of all the characters, the plot felt messy as it tried to balance everything. With the DC universe trying to catch up to Marvel, it tries to do too much too quickly by throwing them at us. The trailers had a great soundtrack and it continued here and some of it was great here but sometimes it was distracting from what was happening on screen.

Despite everything, the acting was mostly decent with Davis and Robbie being standouts, as mentioned above. Joel Kinnaman was okay as Rick Flag but he wasn’t much of a leader here. Jay Hernandez is wasted as Diablo. Akinnuoye-Agbaje as Killer Croc, Adam Beach’s Slipknot, and Courtney’s Captain Boomerang were there. Delevingne was technically there but she didn’t really do much either since it was unclear how much of her performance was her. It at least was definitely nice to see the streets of Toronto used to depict Midway City.

Overall, the film features promise with an interesting concept and interesting characters but doesn’t quite utilize them as good as it should have.