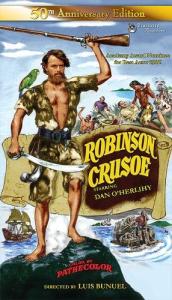 “How wrong I had been. Friday was as loyal a friend as any man could want. With his many different skills he enriched my life on the island. We had found that two working together could do much more than working separately. ” – Robinson Crusoe

Brief Synopsis – After being stranded on a desert island, a man must learn to fend for himself as he seeks a way to be rescued and freed from such a lonely place.

My Take on it – This is a film based on a story that most of us have read at some point or another over time.

They do a very good job of adapting it to the screen and they manage to deal with the written words of the story quite well despite the fact that the majority of the film deals with one sole character.

Dan O’Herlihy is great in the lead role and eventhough he is alone onscreen most of the time, he manages to keep our attention quite easily.

The use of narration in this film works really well in order to help keep the characters thoughts known to us but also keep us believing that he has n’t lost his mind despite being alone for so many years.

This also helps them translate passage of text from the story to the screen.

Unfortunately, the way that this story is told has aged a bit and there have been better desert island films brought to the screen ever since this one yet this does stil have some fascinating scenes to watch along with some of the comical ones that don’t work as well.

Bottom Line – Great story that is told really well. O’Herlihy does an amazing job keeping the audience’s attention as he is completely onscreen alone for the majority of this film. The narration helps keep us believing in the sanity of the main actor because it helps also reflect the thoughts and passages from the novel.  The story itself doesn’t age so well and there are some better desert island films that have been made ever since, but this still is fascinating to watch unfold depsite the comical aspects. Recommended!

MovieRob’s Favorite Trivia – The three lead actors all died in 2005. (From IMDB)