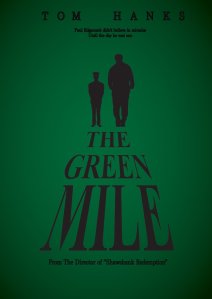 “People hurt the ones they love. That’s how it is all around the world.” – John Coffey

Brief Synopsis – While working as a guard in a Louisiana prison during the depression, a man must deal with his conscience when a simple minded giant with a mysterious gift becomes a prisoner there.

My Take on it –  This is a film that I have loved ever since the first time I saw it in the theater back in ’99.

The characters are developed extremely well and the 3+ hour running time doesn’t feels like a burden at all.

This is one of the best novel to screen adaptations and is done so well.

That largely has to do with the fact that Frank Darabont wrote the screenplay and directed this film and just like his previous Stephen King adaptation, The Shawshank Redemption (1994), he garnered both a Best Picture and Best Adapted Screenplay nomination at the Oscars for it.

This doesn’t sound like much of an achievement, but there are very few directors that have ever managed to earn such nominations on their first two endeavors.

It’s to bad that he missed out on Directing Nominations for both of these films even though he rightfully deserved them too.

The cast is superb and filled with lots of great actors but the two that stand out the most are Tom Hanks and Michael Clarke Duncan (who was nominated for Best Supporting Actor for this role).

Love the fact that this is a realistic overall storyline set in an environment that has a touch of the supernatural instead of the other way around.

The story itself is set in a very dark and disturbing environment yet it is still so amazing to watch because the message that it tells of the hope and discovery in the most dire circumstances and most unlikely places.

Excellent score helps accentuate the way the story is told.

Bottom Line – Amazing film that is among the best adaptations of a novel to screen. Darabont once again proves how adept he is in adapting a King novel nearly perfectly and directs it magnificently.  The fact that he is one of the very few directors to receive Oscar Nominations in Writing and for Best Picture on his first two directed films is an achievement in and of itself.  It’s too bad that he missed out on the Directing nominations.  Superb cast keeps things interesting the entire time and both hanks and Duncan stand out among the best.  The story is set in a dark environment yet still shines because of it’s message of hope and discovery of truth even in the most unlikely places. Best film of 1999 by far! Highly Highly Recommended!

MovieRob’s Favorite Trivia – Tom Hanks accepted the role of Paul Edgecomb as a favor to Frank Darabont, after he was forced to turn down the role of Andy Dufresne in The Shawshank Redemption (1994), in order to play the title role in Forrest Gump (1994). (From IMDB)