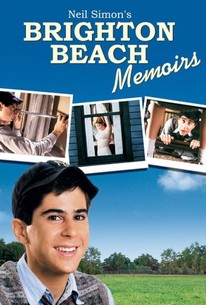 This is my 1st of 2 reviews for The Broadway Bound Blogathon  2018 being hosted by Rebecca of Taking Up Room.

Tnx for letting me partake Rebecca!

“The tension was so thick you could cut it with a knife… which is more than I can say for the liver.” – Eugene

Brief Synopsis – A young boy growing up in Brooklyn during the 30’s deals with family problems, the path to war in Europe and becoming a man.

My Take on it – This is a film that I have loved ever since I first saw it on cable as a 12 year old.

The story works on numerous levels and playwriter Niel Simon manages to make things so poignant the entire way.

Simon used his own youth as a basis for many of the storylines in this film and it shows how well he recalls them because the scenes feel so vivid and the viewer can easily feel as if they are right there in 1930’s Brooklyn.

Jonathan Silverman is amazing in the lead and feels perfectly cast in the role. I know that Matthew Broderick won a Tony for this role on Broadway, but since I’ve never seen his performance, it’s truly hard to compare the two.

The supporting cast is also great and both Bob Dishy and Blythe Danner are very memorable as Silverman’s parents.

The way that Simon interweaves the stories together is done superbly and I believe that this story is probably one of the best (if not THE best) of them because it is so personal.

This story manages to perfectly balance both the dramatic and comedic aspects and manage to evoke both tears of joy and heartwarming tears in the more poignant scenes.

Bottom Line – Excellent film that is so poignant in so many aspects. Simon is able to show the days of his youth so vividly that it feels as if we are right there with him. Silverman is perfectly cast in the lead.  Having never seen how Broderick played the character in this particular play, it’s hard to say which of them is better.  The way that are the stories are intertwined works so well here and this is probably Simon’s best work because it is so personal. The story manages to balance comedy and drama so well that it allows you to cry both tears of joy along with heartwarming ones. Highly Recommended

MovieRob’s Favorite Trivia – Matthew Broderick, who won a Tony Award for playing Eugene Morris Jerome on Broadway, was not available for the film version due to his commitment to Ferris Bueller’s Day Off (1986). Broderick later played Eugene in the film version of Biloxi Blues (1988). Jonathan Silverman, who plays Eugene in this film, had taken over the role for Broderick in the Broadway runs of “Brighton Beach Memoirs” and “Biloxi Blues.” Silverman later played Eugene in the original Broadway production of “Broadway Bound,” the third play in the trilogy. For the Broadway Bound (1992), Silverman played Stanley Jerome, Eugene’s older brother, while Corey Parker played Eugene. Parker had also played Arnold Epstein, an Army buddy of Eugene’s, alongside Broderick, in the film version of Biloxi Blues (1988). (From IMDB)