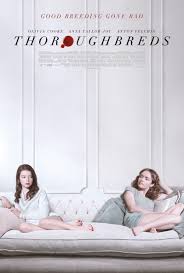 “That’s the first honest thing you’ve said to me since the sixth grade. ” – Amanda

Brief Synopsis – Two troubled teenagers make a pact in order to help solve both of their problems.

My Take on it – This is a film that I heard about not long ago and it sounded like a modern version of Heathers (1988) when two teens try to solve their personal problems together.

The problem with this film is that the story, as told, just isn’t engaging enough as one would hope.

The two leads (played by Olivia Cooke and Anya Taylor-Joy) have great chemistry but we can only se eit in the scenes where the two are left completely alone which doesn’t happen often enough.

Once they leave the confines of a secluded room in a Connecticut mansion, things lose there smoothness and it doesn’t remain as interesting anymore.

The overall plot manages to limp along through most of the film even given the fact that the premise has been used quite successfully numerous times in the past.

The film doesn’t spend enough time explaining the backgrounds of the girls but instead chooses to allude to certain events without giving us enough information for us to care even more.

The story in the end just isn’t satisfying enough and the lack of a deeper understanding of the characters makes us not care much about what will eventually happen and that in and of itself is quite a shame because it does seem as if they could have made this film even more compelling a tale.

Bottom Line – Not nearly as engaging as I would have hoped. The characters have nice chemistry when just the two of them are together but once they leave the confines of a secluded room, things don’t work as smoothly. The plot itself limps along despite the fact that the overall premise has been used successfully numerous times in the past.  The story just isn’t satisfying enough to are about what will happen to any of the characters and that is a shame.

MovieRob’s Favorite Trivia – This was Anton Yelchin’s final film before his death on June 19, 2016 at the age of 27. (From IMDB)