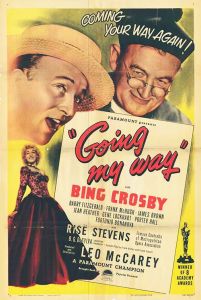 “Hope? You know, Chuck, when you’re young, it’s easy to keep the fires of hope burning bright. But at my age, you’re lucky if the pilot light doesn’t go out. ” – Father Fitzgibbons

Brief Synopsis – A young priest is sent to a failing parish in order to try and change the way things are being run there by the elderly priest who has served that region for 45 years.

My Take on it – This is a film that I didn’t particularly enjoy the first time I saw it 4.5 years ago.

After seeing The Bells of St. Mary’s (1945) a few months back and loving it, I decided that I should rewatch the first film in the series since perhaps I missed something the first time I saw it.

Upon rewatching it, I can say that this is definitely a fun and enjoyable film, but I’m still a bit baffled that it was able to win 7 Oscars including Best Picture because it feels too much like fluff than something inspirational.

Bing Crosby is great in the lead and Barry Fitzgerald manages to steal every scene that he appears in.

Fitzgerald managed to win an Oscar for Best Supporting Actor despite the fact that he was nominated in both that category and in the category of Best Actor and somehow didn’t split his own votes.

This was the only time in Oscar history that an actor was nominated in two different categories for the same role in the same year.  The rules were subsequently updated to make sure that would never happen again.

I think that the Academy needed something light that year since they were very deep into Wold War II at the time and this film came out at the right time.

Bottom Line – Fun and enjoyable film, but not necessarily Best Picture material. The sequel that came out the following year is much better and more poignant a story. Crosby is quite good in the lead, but Fitzgerald steals every scene he is in and deservingly won Best Supporting Actor at the Oscars despite also being nominated for Best Actor (the sole time this happened in history). Music is done well, but still not the best film of the year. Recommended!

MovieRob’s Favorite Trivia –  The film was actually written after its “sequel” The Bells of St. Mary’s (1945); in order to borrow Bing Crosby from Paramount for that film, RKO had to allow Leo McCarey to write and direct “Going My Way”, based on the same character. Oddly, however, “Going My Way” was released first. (From IMDB)