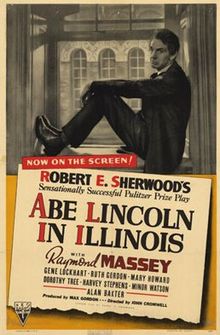 “Well, Abe, there are always two occupations open to those who have failed at everything else: school teaching and politics. ” – Mentor Graham

Brief Synopsis – The life of future President Abraham Lincoln as he tries to find his place in the world.

My Take on it – I have always loved this film even though I only had seen it once before.

Raymond Massey does a superb job portraying the future President and created an iconic performance that someone only managed to eclipse onscreen over 70 years later.

Daniel Day-Lewis does a wonderful job portraying the 16th President in Lincoln (2012), but this film gives us much more about his early life instead of just crucial days during his Presidency.

Despite this, Massey has largely been seen as the iconic film performance of the President who was to be known as one of the very best to ever hold that office.

Massey was quite deserving of his Oscar nomination for Best Actor and gave one of the best performances of the 5 nominees that year.

This story tells us how someone who came from so little was able to eventually become such an inspirational national leader.

It is no secret that many claim that Lincoln was the most influential President ever and this film tries to show us why and how he became the man he did.

The plot and storyline of this film stays interesting the entire time and this remains one of the most inspirational biographical films ever made.

Bottom Line – Massey is superb as the future President and gives one of the very best performances of Lincoln (Day-Lewis slightly eclipses him, but both are superb). We get such a great story of how someone who came from nothing was able to rise to the task of becoming one of the best and most influential Presidents of the US. The story remains interesting the entire time and is quite inspirational.  Highly Recommended!

MovieRob’s Favorite Trivia – After his success playing Lincoln in the film and on Broadway, Raymond Massey began to assume the character in real life. He often appeared at social gatherings dressed in Lincoln-esque attire, assuming a Lincoln-like manner and speech. His friend, the playwright George S. Kaufman, observed, “Massey won’t be satisfied until someone assassinates him.” (From IMDB)