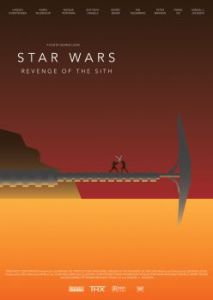 “You were the chosen one! It was said that you would destroy the Sith, not join them! Bring balance to the force… not leave it in darkness! ” – Obi-Wan

Brief Synopsis – As the Clone Wars rage on, the Jedi must try and figure out who is behind it all once the Chancellor of the Republic is kidnapped by nefarious forces.

My Take on it – I recently binged watched all 6 seasons of the Clone Wars animated series that tells the story of the events between episodes 2 & 3.

I’m glad that I finally watched them because they really help enhance an already great film by giving us so much more background on the characters and events.

Loved how they were able to give personalities to the Clone Troopers which also helps make the Order 66 scenes even more gut wrenching.

It’s too bad that they couldn’t have the final episode of the series go right into the first scene of this film, but… oh well.

They do an amazing job with this film wrapping together most of the loose ends in the story. (Even if there are a few plot holes created on the way.)

The story itself plays out really well even though as we all know, it’s filled with Lucas-Lame dialogue throughout.

The special effects of this film were superb and I am still always amazed at the final dual light-saber fights that occur simultaneously because they are so breathtaking to watch and it doesn’t matter how many times I’ve seen it.

I’m still a big sucker for the Order 66 scenes which always make me cry but now with the added knowledge from the Clone Wars TV show, it was even more painful to watch unfold; it is such a tragic series of scenes to watch.

The music by John Williams is once again superb and he is able to blend together the music from all of the other films to get to a culmination point with this film.

This is clearly the best of the Prequel films (despite still loving them all).

Bottom Line – Amazing finale to the saga that had so many of us in its clutches for nearly 30 years. The story plays out really well despite the fact that some of the dialogue is quite Lucas-Lame. The special effects are superb and the final simultaneous light-saber fights are breathtaking to watch no matter how many times one has seen the film. The added knowledge from the Clone Wars TV series really helped enhance this viewing because it gives so much background to the minor characters.  Still cry every time I see the execution of Order 66 because it truly is a tragic and moving series of clips.  Amazing score by Williams also adds to the emotional level of this story.  Best of the Prequel trilogy. Highly Highly Recommended!

MovieRob’s Favorite Trivia – Ewan McGregor and Hayden Christensen trained for two months in fencing and fitness, in preparation for their epic battle. As a result of their practice, the speed in which Kenobi and Vader engage the duel (in the completed film) is the speed in which it was filmed, and was not digitally accelerated. (From IMDB)