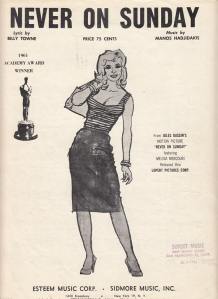 “It’s extraordinary! Where do you learn all those languages?” – Homer

Brief Synopsis – A scholar visiting Greece tries to uncover the reason why Greek society is no longer at the apex and thinks he has found his answer when he falls in love with a beautiful prostitute.

My Take on it – This is another film that I had never heard of beforehand and was intrigued by the premise despite it being mostly in a Greek.

Since I’ve recently been trying to widen my scope of films that I watch including ones that I have avoided for years due to the fact that they are not in English, I decided to give this film a chance.

The premise itself is quite interesting and despite the fact that its a bit unusual, it works almost the whole way through.

The cast is great with both Melina Mercouri and Jules Dassin doing wonderful jobs as the two leads.  Dassin also directed and wrote this film.

They are both able to portray their characters in a way that makes them feel very realistic and genuine in everything they do.

The dialogue of this film is wonderful to follow especially since the range of topic discussed by the characters are vast as they both try to convince the other that their own theories are correct while disproving the other.

This is a really fun film that probably never would have been made in the US at that time since some of the subject matter is quite explicit.

It manages to get 5 Oscar nominations which is quite an accomplishment for a foreign language film at that time (Director, actress, writing, Best song. (which it won) and costumes design.

This film actually has the distinction of being the very first foreign language film to win an Oscar for Best Song for the title song.

It was also the first time that a foreign language film was nominated in the categories of Best Director and Best Actress.

Bottom Line – Interesting premise that works despite it being a bit unusual. The cast is quite good with both Mercouri and (writer/director/actor) Dassin managing to make their characters come alive and seem quite realistic. The dialogue is great and the character have discussions in a range of topics in their quest to prove one another wrong in their theories. Fun film that probably would never have been made at that time in America and managed to get 5 Oscar nominations (Actress, Director, Writing, Original song (which it managed to win making history at the time) and Costume Design. Recommended!

MovieRob’s Favorite Trivia – Features first song (“Never On Sunday”) from a foreign-made movie to win an Oscar. (From IMDB)