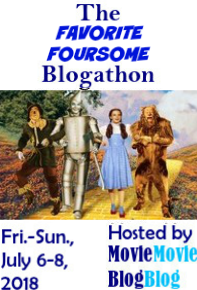 This is the first of five posts for The Favorite Foursome Blogathon being hosted by Steve of the Movie Movie Blog Blog. 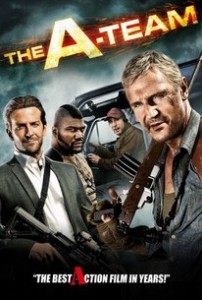 Brief Synopsis – A group of Army Rangers who are experts in complicated missions are sent to recover stolen currency plates.

My Take on it – While trying to think of films to watch and review for this blogathon, I came across this film which is based on a TV show from the 80’s, that I use to really enjoy.

The film didn’t do so well at the box office and I never had much of a desire to see what it was all about beforehand.

The premise of this film (and the TV show itself) actually is quite silly as to how these men became soldiers for hire and despite each of the characters wielding diverse skills to help them form as a unit, it just comes across as being way too laughable.

The show probably worked better since it was done on a much smaller scope than this one.

The premise has way too many holes in it and just doesn’t work as one would have hoped.

The one thing that they do get right is the way that the characters manage to compliment one and another so fluidly.

The action scenes are done well but there isn’t much to the plot itself here.

The cast is quite uneven and Liam Neeson and Bradley Cooper both feel too out of place in their roles.

Bottom Line – This is a film that takes the somewhat silly premise of the 80’s TV show with the same name and tries to bring it to the big screen. The TV show worked much better while using this idea because it was largely done on a much smaller scope. Both the film and show have lots and lots of holes in the way things are done yet they do manage to bring together 4 diverse character with ranging skills who work so well together.  The cast is quite uneven and as great as Neeson and Cooper are in most roles, both feel a bit miscast in this film.

MovieRob’s Favorite Trivia – Sharlto Copley’s mom banned him from watching The A-Team (1983) at home, due to its violent nature. He watched it at friends’ houses on occasion. The first thing he did when he got the role of Murdock was phone his mom and told her “that I was just getting her back for not letting me watch the series when I was a kid.” (From IMDB)