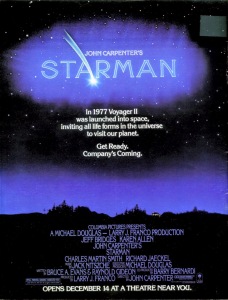 “Love is, um, it’s when you care more for someone else than you do yourself.” – Jenny

Brief Synopsis – An alien arrives on Earth and takes the form of a recently deceased man and then must travel across America in order to rendezvous with his ship in order to return home.

My Take on it – This is a film that I saw once a long time ago and didn’t recall much about it.

The performances by Jeff Bridges and Karen Allen are both pretty good here, but neither does anything that would make them clearly stand out.

That actually makes me question how Bridges got an Oscar Nomination for Best Actor for this role which is even stranger since this film deals with science fiction which makes it usualy even more difficult to get noticed by the Academy.

The biggest problem with this film is the fact that it feels too much like a more adult version of E.T.: The Extra-Terrestrial (1982) which does just about everything the same way except much better because there we get more of an emotional connection to the characters unlike in this film.

I’m aware of the fact that each of the two films were created independently (see Trivia below), but it’s quite difficult to find a way to differentiate between the two because there are way too many similarities between them and unfortunately, this film just isn’t the better version of that particular kind of storyline.

Bottom Line – Bridges and Allen are quite good here, but the story itself is way too reminiscent of another alien film that came out not long beforehand. Ultimately, this film feels too much like a more adult version of E.T.: The Extra-Terrestrial (1982) and doesn’t feel unique or even innovative in anything that it does. I’m a bit shocked that Bridges was nominated for a Best Actor Oscar for this role, because his performance doesn’t at all feel out of the ordinary or unique in any way.

MovieRob’s Favorite Trivia – This script was being developed at Columbia at the same time as another script about an alien visitation. The studio did not want to make both, so the head of the studio had to choose which film to make; he decided to make this one and let the other script go to a rival studio. The other script was for E.T. the Extra-Terrestrial (1982). After ‘E.T.’ became such a huge hit, apparently ‘Starman’ sat on the shelf for almost three years before the Columbia Pictures studio agreed to release it. (From IMDB)