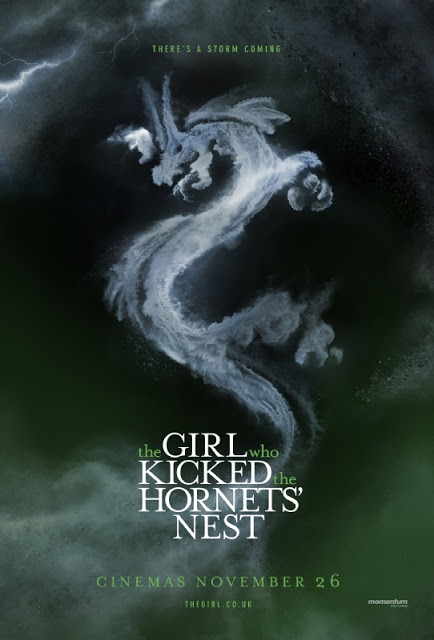 “Everything can be documented and I will publish the story.” – Mikael

Brief Synopsis – Continues the story of Lisbeth Salander as journalist Mikael Bloomkvist tries to find the real culprits who framed her for murder.

My Take on it – After watching the first two chapters of this film trilogy, I knew that I now needed to finally get to see how it all comes together in the end.

This film is the least satisfying of the trilogy yet still manages to give the viewer enough closure on the events of the entire series.

The action in this film moves along much more slowly than in the previous installments, yet the fact that they rely more on surveillance and investigations still keeps things quite interesting the entire time.

They do a wonderful job tying together the events of all three films which helps give the viewer closure on everything that has happened up until now.

The cast is once again great and Noomi Rapace and Michael Nyqvist are still great as the two leads.

The fact that this film is less engaging than its predecessors is helped by the fact that it does deliver closure on the events portrayed in the trilogy.

I’m quite impressed that they somehow managed to make all 3 films in the trilogy in one year instead of doing the Hollywood thing by spreading a trilogy out over 3 years.

It says a lot for the fact that they intended to tell a story and weren’t focused solely on the financial aspects of it all.

Bottom Line – Least satisfying of the trilogy yet still enjoyable largely due to the fact that it gives closure to the whole storyline.  The action in this film is much milder than in the previous films and relies more on the surveillance of characters and the gathering of information explaining everything that happened ion the previous two chapters. Rapace and Nyqvist are still great in these roles and it’s unfortunate that this film isn’t more engaging despite the fact that it manages to tie up all loose ends in the story. Recommended!

MovieRob’s Favorite Trivia – Dr. Anders Jonasson was originally named Anders Jakobsson, after a real-life doctor and close friend of Stieg Larsson. The real Jakobsson, however, confronted Larsson’s father and brother about having denied Larsson’s partner, Eva Gabrielsson, a share of the literary estate. In retaliation, the surviving Larssons changed the character’s name. (From IMDB)

Genre Grandeur Worthy? – Still works quite well but the story deviates too mu ch from the previous chapters and this actually hurts the thrills of this film.