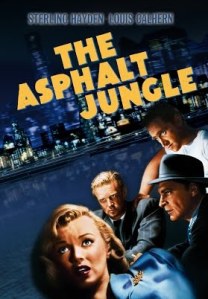 Brief Synopsis – After being released from prison, a criminal decides to mastermind a jewelry heist but things are never as simple as they seem to be.

My Take on it – I have always been a fan of heist films and this one is a great one since it shows how gritty the underworld can be.

The film is directed by John Huston and he manages to present this story in a very realistic fashion which helped earn him a Best Director nomination for this film.

The cast is superb with Sterling Hayden, Louis Calhern, James Whitmore and Sam Jaffe giving great performances. Jaffe was nominated for an Oscar for Best Supporting Actor for this role.

They present the heist in a great way and keeps things thrilling and surprising.

Besides the depiction of the heist itself, they manage to show how corruption can affect both sides of the law and make things more complicated along the way.

Bottom Line – Very interesting crime thriller heist film that is quite gritty in the way that it tells its story. The cast is superb with Hayden, Calhern, Jaffe and Whitmore all giving great performances here.  The way that the heist is presented works really well and we quite quickly learn that no one is ever to be trusted in situations like this one. The story feels quite realistic in its depiction of the events shown and we get to see how corruption can affect both sides of the law in situations like this one.  Recommended!

MovieRob’s Favorite Trivia – John Huston first met Sterling Hayden in Washington, DC, during a protest against the House Un-American Activities Committee investigation of “subversives” in the film industry. When the pair met to discuss the project, Huston said to Hayden, “I’ve admired you for a long time, Sterling. They don’t know what to make of a guy like you in this business.” Huston was honest with Hayden about his chance for the lead role. Hayden recounts in his autobiography Huston’s pitch: “Now, Sterling, I want you to do this part. The studio does not. They want a top name star. They say you mean nothing when it comes to box-office draw–I told them there aren’t five names in this town [that] mean a damn thing at the box office. Fortunately, they’re not making this picture. I am. Now let me tell you about Dix Handley . . . Dix is you and me and every other man who can’t fit into the groove.” Rumored to be fighting severe alcohol and psychiatric problems, Hayden landed the role of Handley, his first major starring role, over the objection of MGM chief Dore Schary. Hayden’s gritty performance proved many Hollywood naysayers flat wrong. For instance, Hayden himself was nervous about the climactic scene in the picture, when Dix breaks down in tears in front of Jean Hagen. According to the director, though, Hayden did not have anything to worry about. After the actor delivered the scene beautifully, Huston took Hayden aside and said, “The next time somebody says you can’t act, tell them to call Huston.”(From IMDB)