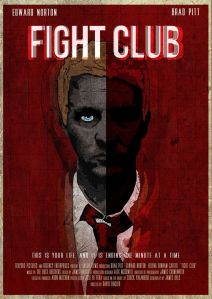 “I found freedom. Losing all hope was freedom.” – Narrator

Brief Synopsis – A bored office worker decides to try and find purpose in his life by joining various support groups which leads to coming in contact with two people who end up changing his life.

My Take on it – I have never been the biggest fan of this film and both times that I’ve seen it prior to now have felt quite underwhelming for me.

I decided to give it another try since I know so many people who love this film, so perhaps I was missing something along the way.

The biggest problem that this film has is the fact that it just doesn’t age very well.

In the nearly 20 years since it came out, the storyline that they try to give us here just doesn’t feel as important as it might have felt back then.

The film is also too “gimmicky” as many films were in the 90’s and once you know the surprises in this film, it just doesn’t remain as intriguing or as interesting as one would hope.

The cast is ok and both Ed Norton and Brad Pitt are ok here but neither is able to take this story to the next level and make this story feel even more poignant than it really is.

Bottom Line – This film just doesn’t age very well and comes across as feeling too gimmicky instead of poignant.  The plot works much better when you don’t know the surprises because once you do, things aren’t as interesting which is quite unfortunate. Norton and Pitt are both pretty good here but neither is able to make this story feel even more important than it truly is.

MovieRob’s Favorite Trivia –  Author Chuck Palahniuk first came up with the idea for the novel after being beaten up on a camping trip when he complained to some nearby campers about the noise of their radio. When he returned to work, he was fascinated to find that nobody would mention or acknowledge his injuries, instead saying such commonplace things as “How was your weekend?” Palahniuk concluded that the reason people reacted this way was because if they asked him what had happened, a degree of personal interaction would be necessary, and his workmates simply didn’t care enough to connect with him on a personal level. It was his fascination with this societal ‘blocking’ which became the foundation for the novel.(From IMDB)