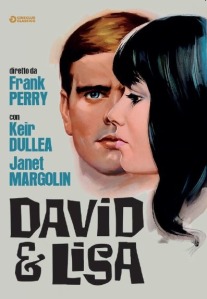 “What makes you think that I ever really talked to you at all? When people talk, it means they say what they really feel. All you ever do is toss words around.” – David

Brief Synopsis – A young man who fears the touch of others is sent to a mental institution in order to be cured where he meets a young girl with a split personality.

My Take on it – This is a film that I had never heard of beforehand and came across it when perusing the films that have had Oscar nominations in the field of Directing.

After having seen this, I must admit that I’m a bit baffled as to how that was possible because there truly is nothing here that makes this film stand out from a directorial perspective.

The premise presented here is interesting yet the story moves along way too slowly for it to work at all.

The film itself doesn’t age very well and was probably much more groundbreaking back when it came out than it seems now.

The cast is alright and features some very talented actors but unfortunately none of them manage to find a way to stand out and make things feel or even seem more unique.

This film deals with some very interesting ideas yet the way that they present things feels a bit too superficial and doesn’t work as well as one would hope that it could.

Bottom Line – Interesting idea that moves along at too slow of a pace and doesn’t really age very well in the nearly 60 years since it was made. This film deals with some important issues, but it feels as if it all is too superficial in the way it’s presented here.  The cast is alright but unfortunately none of them manage to stand out here. I’m still a bit baffled how this film was nominated for best director because there really doesn’t seem to be anything special here that would warrant such a thing.

MovieRob’s Favorite Trivia – Janet Margolin showed up to audition for the role of Lisa carrying a doll. (From IMDB)