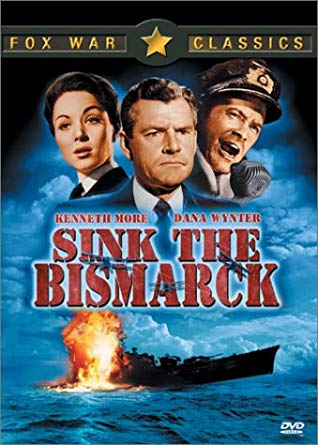 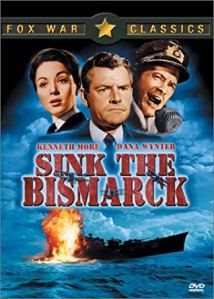 “Fancy me fighting Germans on the high seas! ” – Civilian Worker on Prince of Wales

Brief Synopsis – Depiction of how the British Navy sought after a terrifying Nazi Battleship that was wrecking havoc on the high seas during the early days of World War II.

My Take on it – This film takes a very interesting historucal event and tries to depict it on screen.

They do a great job showing both sides of this cat and mouse chase and let us try and understand the viewpoints of everyone involved.

They wisely focus on the people and events in the war room who need to coordinate the massive logistical undertaking needed to accomplish such an endeavor.

Th sheer amount of men and ships needed for such a task is overwhelming and they manage to show how menacing a threat this battleship truly was to the British (and allied) war efforts at the time.

The special effects are ok for its time but look quite ancient by today’s standards.

The choice to not develop any of the characters very much but instead focus solely on the events themselves was an error in judgement here because it makes the story feel more like a documentary than a thrilling historical action film where we can care about the characters.

Bottom Line – Great job showing the efforts on both sides in this cat and mouse chase.  They wisely focus most of the film in the war room where they are forming the logistics of such an endeavor. The amount of men and ships used is overwhelming but they are able to show how urgent it was to stop this menacing threat.  Unfortunately they chose to only have the story itself take center stage and the characters depicted are all created in superficial ways. The special effects are quite good for its time, but seem ancient compared with the ones used today. Recommended

MovieRob’s Favorite Trivia – Esmond Knight, who plays the captain of the HMS Prince of Wales, actually served as an officer on board her and was injured during the battle.(From IMDB)