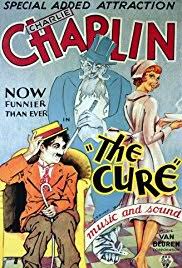 Brief Synopsis – A man suffering from alcoholism shows up at a health spa and causes much trouble.

My Take on it – This is another Charlie Chaplin short film that I came across that I had never heard about before.

As with almost all of his films, Chaplin manages to find a way to utilize his comic genius to give us some great tricks along the way that help keep things quite entertaining and enjoyable.

These antics help elicit enough laughter throughout the story because they are set up so well.

The choice to keep Chaplin in the main role of the drunk (see Trivia section below) works really well because he is able to squeeze enough laughs out of such a role.

The film does a great job showing how these health spas use to work and they manage to show us how they applied their rules and how it would be possible for someone to try and get around those particular rules.

Chaplin is able to keep his antics nice and humorous the whole time while still making things interesting throughout the whole film.

Bottom Line – Another fun Chaplin short that utilizes many of his usual tricks in order to elicit enough laughter about the situation. The choice to keep Chaplin in the role of the drunk was a great one (see Trivia section below).  The way that they portray these kind of health spas is great to see and we learn so much about how the rules are used there and sometimes even broken.  Chaplin’s antics are quite humorous the whole time and he manages to keep things interesting throughout.  Recommended!

MovieRob’s Favorite Trivia – Outtakes show that the original premise was to have Charles Chaplin play one of the employees at the clinic, but switched the roles with John Rand (who was to play the inebriate) after an uninspired performance. Chaplin himself specialized in drunken characters in the English music hall where he grew up. (From IMDB)