Let’s see if I felt that this movie would be worthy of being in the company of my others favorite movies in the genre of Swashbuckler Films.… 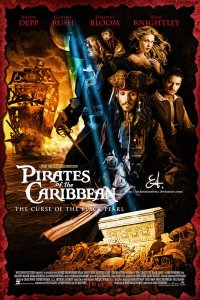 Brief Synopsis – A young blacksmith joins a pirate on an adventure to save the woman he loves after she is kidnapped by a band of cursed pirates.

This entire series was Richard’s choice for me to watch.

This is the only film of the series that I’ve seen beforehand and I recall enjoying it, but wasn’t really blown away with it at the time.

Upon rewatching it, I now see how enjoyable a pirate film this film truly is and it remains the best film of the series (so far).

Johnny Depp is able to carry the story so well and managed to create such an iconic pirate with his interpretation of Captain jack Sparrow.

He keeps things so interesting largely due to the fact that he doesn’t feel the need to take anything seriously and even makes fun of his own persona over and over.

As good a job as he does here, I’m still a bit baffled that he was nominated for Best Actor at the Oscars for this film because it just doesn’t reach that level IMHO.

The special effects of the film are great and work so well within the context of the story.

The story weaves in and out of so many interesting ideas that it manages to stay enjoyable the whole time.

Bottom Line – Very fun film that remains the best of the entire series. Depp is so much fun in the main role and manages to keep things so enjoyable the whole time because he doesn’t take anything seriously. I’m still a bit baffled how he got an Oscar nomination for Best Actor.  The special effects work really well in this film and the story uses so many great ideas that it constantly stays enjoyable the whole time. Recommended!

MovieRob’s Favorite Trivia – Jack (the monkey) is seen smiling when Barbossa thanks him specifically after he returns the Aztec coin to him, after Jack Sparrow chases him. In the special features on the DVD, it is revealed that the monkey did this purely by chance, and it was not planned out in any way. (From IMDB)

Genre Grandeur Worthy? – Comes close, but still lacks something that would have made it even better.

3 thoughts on “Genre Guesstimation – Pirates of the Caribbean: The Curse of the Black Pearl (2003)”