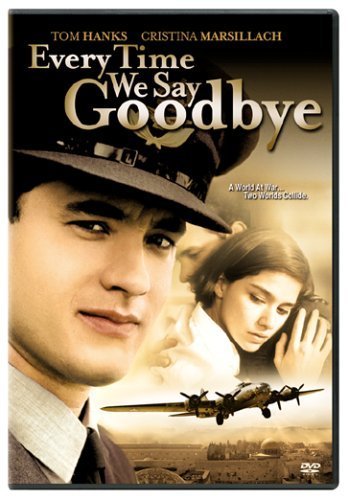 This review is part of the Monthly ABC Film Challenge over at Movie Reviews 101.  This month’s theme is Romance films.

“I think God has a lot to answer for. And I don’t think you can change the world; not much anyway. ” – David

Brief Synopsis – A young Israeli girl falls in love with an American pilot stationed in Jerusalem during World War II.

My Take on it – When one watches a romance film, the most important factor in it should be the question – Can we truly believe that these characters could fall in love under the circumstances shown?

This film fails miserably in that test because it’s quite hard to imagine these character getting together plausibly.

Tom Hanks is a great actor, but I wouldn’t usually classify him as a romantic lead in a drama and he and co-star Christina Marsillach has almost no chemistry together throughout the film.

The overall idea is a good one, yet the fact that the story is so typical of movies is problematic because all that is original here is the setting itself and not the forbidden love aspects presented.

A lot of the scenes in the film come across as humorous instead of poignant and dramatic as one would expect from a story like this.

Bottom Line – Interesting idea that is just not presented well enough. The love and chemistry between the characters is almost non-existent and is sorely missed from such a tale.  The forbidden love aspect of this story has been used and re-used so many times that nothing really feels original with the idea besides the setting of it all.  Many of the scenes come across as being laughable instead of poignant which takes away so much from what this kind of film is attempting to do.

MovieRob’s Favorite Trivia – Sarah and Victoria’s family are Sephardic (or Sephardi or Separdim) Jews who because of the diaspora, lived in North Africa, Spain and Portugal around 1,000 AD. They spoke a language called Ladino, which is an amalgam of Spanish, Hebrew and Aramaic. The etymology of “Sephardic” is from a country mentioned in the book of Obadiah in the Hebrew Bible, and is believed to be representing Spain. The Sepharic were exiled from Spain by the Alhambra Decree of 1492. (From IMDB)