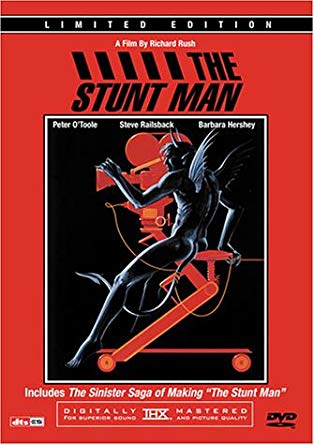 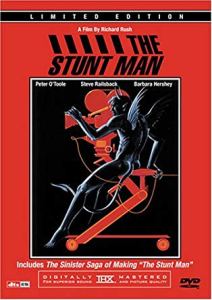 “Do you not know that King Kong the first was just three foot six inches tall? He only came up to Faye Wray’s belly button! If God could do the tricks that we can do he’d be a happy man!” – Eli Cross

Brief Synopsis – A young Vietnam vet running from the police gets involved in a movie production as a stunt man and is taken under the wing of a very dedicated yet God-like Director.

My Take on it – This is a film that I’ve heard about for so many years yet never got around to seeing what it was all about.

As a big fan of the “finished product” of the movie making endeavor, I loved getting so much insight into the hard work and dedication needed to eventually give us the films we watch.

So many interesting things go on behind the scenes of making a movie and this film shows us that even the absurd things help build the characteristic of the way the film is made.

Peter O’Toole is amazing in the lead role here and seems perfect as the God-like Director of this fictional film in order to try and transfer his vision to something tangible on screen.

He is willing to do anything to make his cast and crew do what is needed for this vision even if it requires him to manipulate them along the way.

The amount of work that goes in to making a film is unbelievable and this film shows how complex the system truly is.

Both O’Toole and Director Richard Rush were deservingly nominated for Best Actor and Director at the Oscars for their respective jobs in making this film so enjoyable to watch.

Bottom Line – Great film that is able to show the audience the kind of things that go on behind the scenes while filming a movie. O’Toole is perfect in the role of Director of this film who constantly plays the part of God in order to get his vision made the way he wants while constantly manipulating his actors and all other key personnel involved behind the scenes. As a fan of the “finished product” of movies, I found it quite insightful as to how much work goes in to making a film at all costs. O’Toole and Rush were both deservingly nominated for Best Actor and Director at the Oscars for their respective roles. Highly Recommended!

MovieRob’s Favorite Trivia – While Eli Cross and others ride in a boom Crane Basket and Eli Cross talks about movie illusion, they entered the basket at the beach in La Jolla CA, and exit the basket 15 miles away at the Hotel del Coronado. (From IMDB)