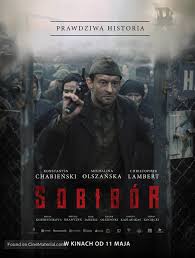 “We must find a way to escape.” – Alexander Pechersky

Brief Synopsis – A group of Jewish Russian POW’s in a death camp help the prisoners find a way to plan an escape before they are all exterminated by their Nazi captors.

My Take on it – As a HUGE fan of the film Escape From Sobibor (1987) and the book it is based on, I was actually eagerly anticipating seeing this new version of the story told from a Russian perspective instead.

Unfortunately, they manage to really butcher such an amazing tale of courage and defiance because they present it all so poorly here.

This film fails to give more details about the overall story of the uprising and instead centers on a small few of the heroes which takes away from the overall breakdown of how and why the escape was prepared and executed.

This film does manage to give a much darker and bleaker look at the whole situation in this concentration camp than the original stories from thirty years ago and this helps us understand on an even deeper level the dangers and other pitfalls that these men and women faced as they planned their escape.

The characters aren’t developed well enough and most of them feel more like caricatures which takes away from the possibility of finding a way to connect to any of them and care what will eventually happen to them over the course of the story.

Rutger Hauer did a much better job in the original version of this story of making the character of Sasha more appealing and heroic than director/star Konstantin Khabenskiy was able to do in this version.

Bottom Line – Great story yet it is told really poorly here. The film Escape From Sobibor (1987) gives us a much more complete look at the story and how they planned the escape. This version keeps things very dark and bleak but fails to help us find a way to connect and care for the characters along the way.

MovieRob’s Favorite Trivia – Official submission of Russia for the ‘Best Foreign Language Film’ category of the 91st Academy Awards in 2019. (From IMDB)