This is the final of three posts dedicated to The Lauren Bacall Blogathon being held over at In The Good Old Days of Hollywood. 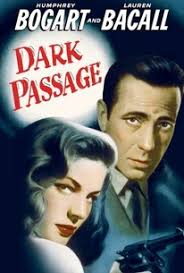 “Ever see any botched plastic jobs? If a man like me didn’t like a fellow… he could surely fix him up for life. Make him look like a bulldog, or a monkey. I’ll make you look as if you’ve lived.” – Dr. Walter Coley

Brief Synopsis – An escaped convict finds refuge at a strange woman’s apartment as he tries to find a way to avoid the police and still prove his innocence.

My Take on it – This is a film that I had never even heard of before seeing and was glad to go into completely “blind”.

The overall premise is quite a good one and it works well most of the time despite the fact that there are a few choices made from a production perspective that hinder things a bit.

The idea to keep the first half of the film from a camera perspective so we cannot see the main character’s face is a bit jarring along the way and makes parts of the story seem quite humorous instead of thrilling.

They probably should have chosen to either use heavy makeup to show how the character changes over the course of the film or even utilize two similarly built actors in the same role.

The plot itself moves along at a nice pace and constantly keeps the audience guessing what is really going on and what is truth vs fiction.

The chemistry between Humphrey Bogart and Lauren Bacall is amazing here (no surprise) and that helps make us believe even more the bond that forms between these two characters over the course of the film.

Bottom Line – Interesting idea that works quite well despite some strange choices on how it is presented. The idea to keep the story in a first person camera perspective for almost half of the film takes away from some of the impact and might have been better utilized by having two actors play the same character or using heavy makeup since the camera work can be quite jarring. The plot moves along at a great pace and keeps us guessing various elements of the story that are only slowly revealed. Obviously Bogart and Bacall have great chemistry together and this helps us believe the bond that begins to form between them over the course of the film.  Recommended!

MovieRob’s Favorite Trivia – Between the film’s unorthodox “first person perspective” and Humphrey Bogart’s negative press from his support of the Committee for the First Amendment established in the face of the hearings being done by the House Un-American Activities Committee led to the film having a poor performance at the box office. (From IMDB)