This review is part of the Monthly ABC Film Challenge over at Movie Reviews 101.  This month’s theme is Horror films. 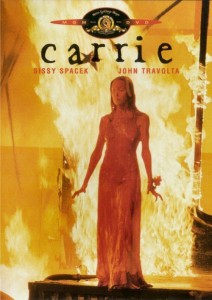 “It has nothing to do with Satan, Mama. It’s me. Me. If I concentrate hard enough, I can move things.” – Carrie

Brief Synopsis – A teenager whose mother is overprotective of her due to her own religious stances is bullied by her classmates which helps her realize that she has the power to move objects.

My Take on it – As a non-fan of the horror genre, this October is never an easy month since the whole world loves horror films besides me.

When I joined Darren’s challenge, I was a bit skeptical as to whether would partake this month, but decided that there are some films that I finally need to see even if they are outside of my comfort zone.

I am a big fan of Stephen King’s work and always like the way that he is able to explore other aspects of life along with horror, so I was a bit intrigued to see what would happen with this one.

The idea of bullying and abuse is presented really well and the fact that the main character is effected both at home and school by these issues works quite well because they are both done in very realistic ways.

She is bombarded by bullies in all facets of her life and still tries to continue to live a normal life despite it all.

The aspect of having a superpower like telekinesis is explored nicely and we get to see how her power begins to slowly grow.

The cast is great and it was quite fun seeing actors and actresses in key roles who wold eventually go on to bigger and better things like Sissy Spacek, John Travolta, Nancy Allen, Amy Irving and William Kaat.

Spacek was deservingly nominated for an Oscar for Best Actress for this role even if she had little chance of winning against Faye Dunaway in Network (1976).

Bottom Line – Interesting idea that shows a different view of the effects of both abuse at home and abuse at school. The way that both situations are handled very differently works quite well in showing the realism of the situations presented. The cast is superb especially since most are actors and actresses who are at the beginning of their careers but would go on to much bigger things. Spacek was deservingly nominated for Best Actress at the Oscars for this role. Recommended!

MovieRob’s Favorite Trivia – While speaking at a book event in Fort Myers, Florida in 2010, Stephen King recalled that he was paid just $2,500 for the movie rights to Carrie (1976), which may seem like a pittance, but he has no regrets. “I was fortunate to have that happen to my first book,” King said. (From IMDB)