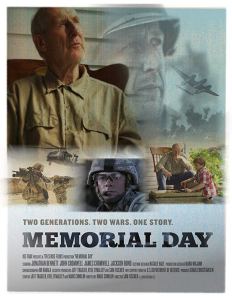 “If you do wear the uniform one day, remember something, when you put it on, you don’t get to choose the war or what happens when you get there. There’s no right or wrong in combat. Here’s only what you did. You do your best, and you try to live with it. Some day they’ll take me off this porch for good. When that happens, what’s left that matters? Photographs, letters, empty clothes? No. It’s the stories behind them, those are what matter. Stories live forever, but only if you tell them. I may sound like I’ve known this a long time. I didn’t know it until today. I just wanted to say thank you for teaching me that. It was one hell of a souvenir.” – Bud

Brief Synopsis – A soldier on duty in Iraq reflects on a momentous day of his childhood when he learned about his grandfather’s experiences during World War II and how that day affected both of them.

My Take on it – This is a film that I came across by accident a few years back and immediately was taken in by the realism of it all.

This movie found a way to discuss the way that the lives of men and women serving their country can try and find a way to deal with the various traumatic events that they experience in combat.

The story is told in a way that makes it feel quite timeless and both parallel storyline could take place at just about any era in history and still come across as being very genuine and realistic the entire time.

This film has a two-fold message and it is able to resonate throughout about the way that one should find a balance between the painful memories of the past while still trying to move forward to the future.

The cast does a wonderful job here but the clear standout is James Cromwell who gives one of his best performance here.

This is not a film that most people have ever heard of, but they do an amazing job depicting the way one can possibly deal with trauma after having faced the enemy in combat.

Can’t wait to see this film again soon because it is packed with such an emotional punch.

Bottom Line – Such an amazing film that says so much about the lives and traumas of men and women who choose to spend their lives fighting for their country. The story itself is quite timeless and each of the two storylines could take place at so many different times in history and they would still work. The message of this film is two-fold and it resonates throughout about the importance of finding a way to balance the painful memories of the past while trying to move forward into the future. The cast of this film is superb and James Cromwell stands out among them all.  His real life son, plays the younger version of his character and the striking resemblance of the two helps make it feel so realistic along the way. Not a film most people have heard of or even seen, but an excellent depiction of how one deals with the trauma of combat. Highly Highly Recommended!