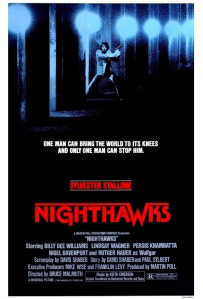 Brief Synopsis – Two New York detectives are recruited to help track down an International terrorist who has planned a deadly attack.

My Take on it – This is a film that I had heard about for quite a long time yet never really had much of an inclination to see what it was about.

I guess that in an attempt to try and break free from his Rocky persona, Stallone decided to grow a beard in order to try and look tougher.

The overall idea of the film s interesting yet it doesn’t work as well as one would hope largely due to the way that the characters are presented as very stereotypical instead of three dimensional.

Rutger Hauer is great as the villain and he remains a chilling figure throughout but Stallone and side kick Billy Dee Williams (Lando Calrissian) feel more like keystone cops than elite detective chosen to work for the government in this manhunt.

The film does a nice job with the cat and mouse game despite the numerous plot holes along the way which makes things a bit more bumpier and inconsistent than one would hope for.

There are some great action scenes in this film, but overall it comes across as being slightly better than mediocre.

Bottom Line – Interesting idea that just doesn’t work as well as one would hope. Hauer is a great villain but the characters played by Stallone and Williams seem too much like cartoon characters than real cops.  The cat and mouse game is fine here but there are too many plot holes to make it all flow smoothly.  This film has some great action scenes, but overall the whole films feel quite mediocre and very dated.

MovieRob’s Favorite Trivia – Sylvester Stallone said of the cable-car stunt to ‘Ain’t It Cool News’: “Hanging from the cable car was probably one of the more dangerous stunts I was asked to perform because it was untested and I was asked to hold a folding Gerber knife in my left hand so if the cable were to snap, and I survived the 230 foot fall into the East River with its ice cold eight mile an hour current, I could cut myself free from the harness because the cable when stretched out weighed more than 300 pounds. I tell you this, because it’s so stupid to believe that I would survive hitting the water. So to go beyond that is absurd.” (From IMDB)