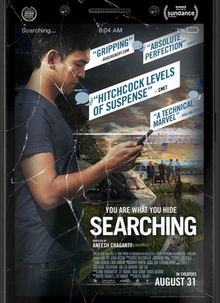 Brief Synopsis – When his teenage daughter goes missing, a single father tries to find her on his own by looking for clues on her computer.

My Take on it – This is a film that I hadn’t heard of before I saw it and was extremely surprised as to how good it is.

The overall idea is quite ingenious and it works really well the entire time.

They are able to find a way to utilize the presence of social media and computers in our lives to an extreme that hasn’t been done before and it’s amazing to watch how things are played out over the course of the film.

The film is almost entirely seen from the viewpoint of someone watching a computer screen and normally one would assume that it would leave them in a lurch part of the time but instead they are able to create some great twists and turns via this ‘gimmick’ that constantly raises the level of suspense as things move along.

This also proves the potential of such an idea for future films that wish to also use this medium.

The viewpoint of the computer works twofold because it on the one hand lets the viewer feel as if they are watching things as they happen yet at the same time, it sometimes makes the viewer even think that they are the one making these discoveries onscreen as they happen.

John Cho proves with this performance how great an actor he can be because he carries the whole film pretty much on his own and does so amazingly.

I can’t wait to watch this again to catch all that I missed the first time around.

Bottom Line – Amazing idea that works so well.  The way that this film utilizes social media and computers is amazing to watch and things are played out so well over the course of the film.  Despite most of the film being viewed via a computer screen, they are able to create some really thrilling twists and turns along the way that show the potential of using this kind of media in other films. The viewpoint of the computer helps make the viewer feel as if they are watching everything going on as it happens and in some places makes us feel as if we are the ones making the discoveries on screen.  Cho is superb in the lead and shows the acting potential that he has especially since he appears in almost the entire film.  Highly Recommended!

MovieRob’s Favorite Trivia – Since they had a seven-week head start on shooting, director Aneesh Chaganty and producer Sev Ohanian hired the editors and together they made a rough version of the film, with Chagnaty playing all of the characters, that lasted for an hour and 40 minutes. They showed this version of the film to the crew before shooting began, in order to give everyone a feel for what they were making. (From IMDB)