This is the first of three posts dedicated to The 100 Years of Rita Hayworth Blogathon being held over at Love Letters to Old Hollywood. 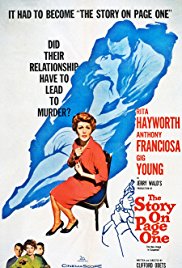 “He’s been with the judge twenty minutes. What could he be saying to him? ” – Victor Santini

Brief Synopsis – After being accused of murdering her husband a woman and her lover try to prove their innocence of the crime in court.

My Take on it – I chose this film as my first entry in this blogathon largely due to the fact that the premise sounded quite interesting especially given the fact of when it was released.

They handle the film’s plot with kid gloves and things are quite tame despite the fact that underneath it all, we can easily see that things are slightly more complex.

The story arc presented is one that has been copied so many times over the 6 decades since this film was made and that makes it quite hard to determine how original the story itself really is.

When it came out in 1959, it’s possible that it was hailed as being groundbreaking and unique, but today that isn’t so easy to claim.

The cast does a nice job here and the three leads are all superb most notably Rita Hayworth as the woman torn between two men who must try and prove her innocence despite all of the evidence against her.

This film actually deals with the issues of infidelity and bad marriages quite well eventhough the climate at the time this was made was not an easy one to present or discuss these kind of subjects openly.

Bottom Line – Interesting idea that is handled very tamely probably due to the time period when it was made. The story arc is one that has been reused so often over the past 60 years since this film was made that it’s quite hard to judge the originality of the story after so many years. The cast does a nice job with this one and Hayworth stands out in the pivotal role of the woman trying to prove that she didn’t kill her husband despite the evidence against her. They deal with issues of infidelity and bad marriages quite well especially given the climate of how much films were allowed to discuss at that time.  Recommended!

MovieRob’s Favorite Trivia – Marilyn Monroe was the first choice for the lead.  (From IMDB)