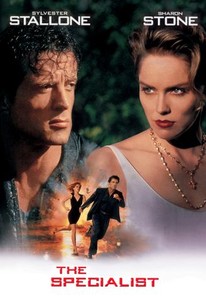 “You like watching them die? You like taking them down? Now I’m taking you down. You’re finished in the agency. You’re going no higher. You’re as dead as those people in the river. We both are.” – Ray

Brief Synopsis – A bomb specialist is hired by a mysterious woman to help her with a revenge plan against three mobsters who murdered her parents.

My Take on it – This is yet another Sylvester Stallone action thriller that I somehow missed.

The plot and storyline come across as pretty silly and campy the whole time and very little of it actually makes any real kind of sense.

The casting of Sylvester Stallone and Sharon Stone in the lead roles probably looks good on paper (but their onscreen chemistry is horrendous and all falls completely flat.)

James Woods plays the villain in a way where he comes across as being a typical stereotypical cocky bad guy. without feeling unique at all.

Some of his antics are completely insane and they don’t seem to fit the idea that they are trying to convey.

The plot is filled with lots and lots of holes and in the end, we are left with too many unanswered and unexplained questions.

This film is largely know for the love scenes between the two leads but instead of it feeling genuine and real, it comes across as seeming quite laughable.

There is no question about the fact that this is clearly among Stallone’s worst films.

Bottom Line – Another terrible and campy action film that has so few merits.  Stallone and Stone has terrible chemistry together and even the scenes that one would expect to work well fall flat.  Woods plays the stereotypical cocky bad guy and does some crazy things along the way that just don’t fit. The plot itself is filled with too many holes and they end up with more unexplained questions than answers by the end.  The notorious love scene between the two leads is laughable instead of feeling like it is genuine.  This is among Stallone’s worst roles over his storied career.

MovieRob’s Favorite Trivia – Sylvester Stallone had this to say on filming the shower scene with Sharon Stone: “OK. Let it be known, I didn’t want to do this scene because Sharon was not cooperating. We get to the set and she decides not to take her robe off. The director asks only a few of the crew to remain, and she still won’t take it off. I promised her I wouldn’t take any liberties, so what’s the problem? She said, ‘I’m just sick of nudity.’ I asked her if she could get sick of it on someone else’s film. She was having none of it, so I went down to my trailer, brought back a bottle of Black Death vodka that was given to me by Michael Douglas and after half-a-dozen shots we were wet and wild.”  (From IMDB)