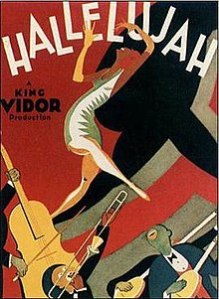 “You knows you’s just jokin’! Why I never had no new pants in my life. Why as soon as you grows out ’em, I steps in.” – Spunk

Brief Synopsis – A young black sharecropper gets into lots of trouble when he falls in love with a young woman named Chick who is only out to exploit him.

My Take on it – This is yet another film that I knew absolutely nothing about before watching it.

I have seen a few films directed by King Vidor so I was intrigued p see what he would do with this one.

Unfortunately, this film is atrocious when looking at it from today’s standards.

I’m sure that it was at the time due to the utilization of an all all-black cast used as the singers in one of the very first “talkies”.

This film comes across as seeming quite racist in it’s depiction of the characters and pretty much in everything else that it does here.

The way that the story itself plays out is actually quite risque for its era.

I can’t say that I was drawn in o the fact that they make implications that this kind of life was the sole choice for low level black communities ta the time.

None of the characters feel unique at all and they pretty much all follow typical Black stereotypes in films for those days and that too helps perpetuate the racist undertones of this film throughout.

What’s unfortunately is that the overall premise of this film might work well if it had been presented without the racist aspects of it and I wonder if someone were to make this film now, if it would remain captivating.

Bottom Line – Terrible film that may have been groundbreaking at the time due to the use of singing in a “talkie” and utilizing an all-black cast but it now comes across as seeming very racist in everything that it attempts to do.  The story itself is quiet risque for its time and the implication that that was “only” the way of life in the low level black communities. The characters all feel like stereotypes and that also helps perpetuate the racist undertones throughout.

MovieRob’s Favorite Trivia – King Vidor had been hoping to make the film for several years, and jumped at the chance to make it with the advent of sound. He so wanted to produce the picture that he offered to give up his salary. (From IMDB)