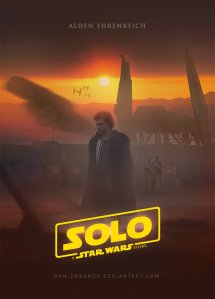 “I don’t like it, I don’t agree with it, but I accept it.” – Lando Calrissian

Brief Synopsis – A street rat living in the slums of Corellia dreams of taking to the stars to make a better life for himself and his girlfriend.

My Take on it – This is the fourth time that Ive watched this film and it just gets better and better for me ever time I see it.

Alden Ehrenreich is great in the lead and is able to mimic so many of Ford’s mannerisms that it’s easy to forget that they are not the same person playing the various stages of the life of this character.

They manage to find a way to tell this story where it turns out to be a mixed bag of genres which helps keep it fascinating the whole time because it so smoothly transitions and mixed these varying themes.

They are able to show a coming of age story, a romance, a heist flick, sci-fi story that takes place in a live-in world that we are all already familiar with, lots of adventure and action and still manage to keep it thrilling throughout.

The characters (both returning and new ones) are all great to watch and they find a way to keep surprising the entire time which constantly makes the viewer question the loyalty of everyone since they prove that it’s impossible to fully trust anyone.

The cats is superbly chosen and they all fit into these roles so perfectly the entire time.

This film may have possibly added too many of Han Solo mannerism origins but the very fact that the odds of the film having a sequel are quite slim so therefore it’s a great thing that they crammed so many of those ideas into this one otherwise, we would never get to see them.

This helps flesh out the galaxy’s best anti-hero scoundrel that we have grown to love.

Can’t wait to see this movie yet again!

Bottom Line – Gets better and better every time I watch this. Ehrenreich is a great choice as the younger version of Ford and fits very well into the iconic role of Solo. The way that the story is a mixed bag of genres works to its advantage.  They are able to include a coming of age story, a romance, a heist, lots of adventure, action and manage to keep it all thrilling the whole time. The returning and new characters are all great and we are given enough surprises along the way to make the viewer constantly question the loyalty of anyone since truly no one can be trusted in this story.  The cast is superbly chosen and all fit the roles they are given quite well. They may have added too many of the iconic symbols of Han Solo into this film, but the fact that it probably isn’t gonna have any sequels makes it so much better knowing that these bits help describe how he came to be the anti-hero scoundrel that we all have grown to love. Highly Highly Recommended!

MovieRob’s Favorite Trivia –  The Golden Idol (Fertility Idol) from the opening scene of Raiders of the Lost Ark (1981) can be seen sitting on a table in the meeting room of Dryden Vos (Paul Bettany). Harrison Ford, who originally played Han Solo, also played Indiana Jones in Raiders of the Lost Ark (1981). Director Ron Howard confirmed this Easter egg on Twitter. (From IMDB)