Please get me your submissions by the 25th of Nov by sending them to musicaldeb@movierob.net

Let’s see if I felt that this movie would be worthy of being in the company of my others favorite movies in the genre of Movies About Musicians.… 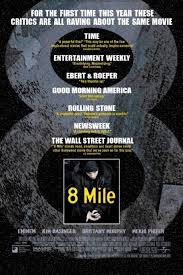 “I’m gonna turn around with a great smile, and walk my white ass back across 8 Mile.” – Rabbit

My Take on it – This is a film that I’ve had an interest in seeing ever since it came out due to the location of where the film is shot and takes place.

I grew up just a few miles away from there and we always knew that 8 Mile Road was the divide between Detroit and the suburbs.

Despite the fact that this film takes place so close to where I lived, it feels so otherworldly and they definitely get that aspect of the film right.

The problem with this film is that it takes a generic premise and tries to keep things similar to what has already been done with the idea and just change the venue to hip- hop which makes it somewhat unique.

Unfortunately, besides the rap battles, this film doesn’t feel original at all.

Eminem is nice in the lead role but that largely has to do with the fact that he is a great rapper but one can’t mistake him for a great actor but due to his familiarity with the role (since it is somewhat biographical a story) is still works.

This film won an Oscar for Best Song for the song Lose Yourself.

Bottom Line – Interesting film that is unique in the venue yet feels too generic and standard from all other standpoints. Eminem excels here in the main role due to his rapping abilities which helps him play those scenes especially well.  Due to his familiarity with the role (which is semi biographical), he manages to play the rest quite well even if the story feels too often as if it is rehashing scenes from so many other films.  Despite growing up not far from where this film was shot and takes place, they further prove how the divide of 8 Mile road makes things feel otherworldly. Won an Oscar for Best song for Lose Yourself.

MovieRob’s Favorite Trivia – Eminem was unable to accept his Academy Award in person. He felt so sure another nominee would win that he did not bother to attend the ceremony. Instead he was sleeping, while his daughter watched cartoons the night he won. (From IMDB)

Genre Grandeur Worthy? – Not really. Film feels too generic even if the venue of hip-hop is unique.