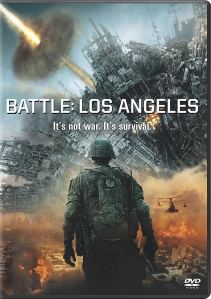 “Sh*t, I’d rather be in Afghanistan.” – Corpsman Jibril Adukwu

Brief Synopsis – After the Earth is attacked by alien invaders, a platoon of soldiers defending Los Angeles need to find a way to stop the enemy.

My Take on it – This is a film that gives us an interesting perspective of a battle with alien invaders and that is the viewpoint of the soldiers on the ground who are thrown into the battle in order to stop the advancing enemy using modern technology against alien technology.

Unfortunately, such a premise could be shown very poignantly and patriotic but they miss the chance to do more woth this.

Instead the film just goes through the typical action film motions while using most of the unrecognizable cast as cannon fodder.

Aaron Eckhart is a great actor as he proved while playing Harvey Dent in The Dark Knight (2008), but in this film they miss the opportunity to give him more to do and he feels very underused and his character (like all of them unfortunately) is completely underdeveloped so it’s so hard to care about what will happen to him or anyone else for that matter.

This film does have some fun action scenes, but it has little more to offer than that which is a shame.

Bottom Line – Interesting idea that gives us a unique perspective on an alien invasion but instead of feeling poignant, it just goes through the motions of being an action flick where most of the cast is used as cannon fodder. Eckhart is a great actor (as he proved in The Dark Knight (2008) as Harvey Dent), but he is underused here and his character (like all the rest) are very underdeveloped so that there is no need to care about any of them along the way.  Has some really fun action scenes, but nothing more than that.

MovieRob’s Favorite Trivia – Aaron Eckhart said, out of all the movies he has made, this was the most fun, yet toughest, one to make. He went on to say that he would love to return for a sequel and would like it to be set in Paris, France. (From IMDB)