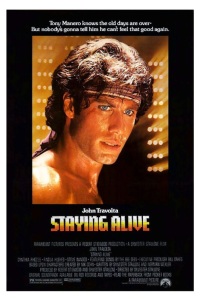 “Who do you think you’re dealing with… some little groupie who jumps when you call? Is that who you think I am? We met, we made it. What do you think it was? True love? And you say I used you, but what about you using me? Everybody uses everybody, don’t they?” – Laura

Brief Synopsis – In the sequel to Saturday Night Fever (1977), Tony tries to get a job as a dancer on Broadway.

My Take on it – This film shows us what kind of life Tony from Saturday Night Fever (1977) chooses to live as he attempts to find a job for himself as a dancer in a Broadway show.

The story is quite boring and repetitious while it tries to highlight the dancing talents of John Travolta forgetting to give us an actual interesting story to follow.

The music and dance moves are classic 80’s and they are able to show how the music culture of that decade affected things.

The story itself drags along way too much and they don’t manage to give us anything inspirational to actually car about.

I’m so glad that Travolta never chose to make a 3rd film in this series.

It’s noteworthy to mention that Sylvester Stallone directed this film that is quite bad eventhough is managed to do well at the box office when it came out.

Bottom Line – Pretty boring film that tries to highlight Travolta’s dancing talents but lacks much of a real story.  The music and dance moves are very reminiscent of the 80’s and are able to show the kind of music culture there was at the beginning of the decade.  The story drags along too much and doesn’t manage to give us anything more inspirational like it should.  Glad that Travolta never tried to make a 3rd movie in this series.

MovieRob’s Favorite Trivia – Although the film is considered a flop by many, it did well enough financially that Paramount considered having Stallone and Travolta star together in The Godfather III as their next project. The story reportedly would have had Stallone and Travolta as rival mob leaders caught up in a drug trade war. The idea was eventually eschewed when the original creative team of Francis Ford Coppola, Mario Puzo, and Al Pacino decided to return for a third installment. (From IMDB)