This is the final of 6 films that I was “forced” to watch by my fellow bloggers who participated in my Blogiversary Contest back in April.  This movie was chosen by SG.  Tnx for the suggestion.  Let’s see what I thought of it…. 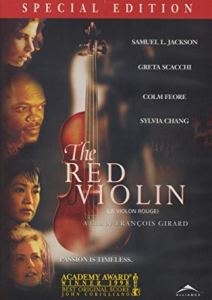 “What do you do when the thing you most wanted, so perfect, just comes? ” – Charles

Brief Synopsis – The life of a violin as it travels through the hands of various owners over the course of a few centuries.

My Take on it – This is a film that I recall won an Oscar for Best Musical score in a year where it beat out films like American Beauty (1999) and The Cider House Rules (1999), but I never really had much of an urge to see it.

When SG chose this film, I was actually excited to finally see what it was about especially once I discovered that it fits into the genre of portmanteau or an anthology film that follows an object through it’s life and through various shorter stories than usual.

This film follows a violin from its creation as it is passed from hand to hand over numerous centuries and geographical locations set on different continents.

The idea of using a musical instrument like this as the theme is a fascinating one and it works exceptionally well.

Some of the stories are a bit slow, but they still mange to find a strong bond to the violin which adds more tension to the final confrontation in an auction house between various collectors and descendants of previous owners.

It’s truly amazing that they are able to think of so many clever stories as to the type of people that might encounter such an instrument over time and space.

The story are all quite diverse and help to show how music can be so international and global and can connect people over such distances.

The interludes between the stories that occurs in the present help to give a very strong anchor to the overall storyline and is used to build a connection along with continuity between the various storylines throughout.

Bottom Line – Fascinating idea that works quite well. The stories moves a bit too slowly, but they still manage to tie them all together in an attempt to add enough tension for the final confrontation between all of the various storylines.  It’s amazing that they could think of so many great ideas as to what kind of people could encounter this object over the centuries and the distances that it travels between each of its stops. The diversity of the storyline works really well in showing how global and international the idea of music is and the way that it connects everything together is done extremely well.  The interludes in the present between storylines helps to give a string anchor to the story and is able to move things along really well. Highly Recommended!

MovieRob’s Favorite Trivia – Cesca’s (Anita Laurenzi’s) Tarot deck appears to have been specially designed for the film. The five cards drawn are all Major Arcana and resemble the Tarot of Marseilles in design, except that the devil holds one prisoner instead of two on the Devil card, and the Chinese flag is discernible behind the figure in the Justice card.  (From IMDB)