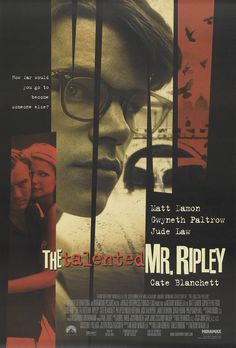 “I always thought it would be better to be a fake somebody than a real nobody. ” – Tom Ripley

Brief Synopsis – During the late 1950’s a young man who cons his way into other peoples lives is sent to Italy to convince a rich boy to return home but things get out of hand when he arrives there.

My Take on it – This film has a very interesting idea that just doesn’t manage to work well enough.

The story itself moves at a super slow pace and it doesn’t succeed in developing the characters well enough for the viewer to know them and to care about what happens to them.

They all do nice jobs with what they are given despite the fact that the story itself doesn’t manage to play out well enough.

This is based on a best selling novel and probably works much better on paper than on the screen because it allows for the reader to understand so much of the reasoning behind much of what happens especially within the minds of the characters themselves.

That just doesn’t translate well enough for the screen since most of those ideas are quite difficult to relate to on a visual level.

Bottom Line – Interesting idea that just doesn’t work well enough. The story moves a bit too slowly and its hard to care about any of the characters because they don’t seem developed enough for us to get to know them. Great cast led by Damon, Law, Blanchett, Paltrow and Hoffman are all quite good here even if the story itself doesn’t play out well enough.  This story is probably much better on paper because it can help explain so much of what is happening in the mind of the main character that isn’t relatable enough visually.

MovieRob’s Favorite Trivia – As noted, the opera excerpt is a scene from Eugene Onegin, by Tchaikovsky. The title character in the opera is, like Ripley, an attractive, charismatic, and clever young man, who aspires to be accepted by people of a higher social standing. This is best portrayed at the beginning of the third act when Onegen crashes a dinner party where he is clearly over his head and is quickly spotted as a poseur. (From IMDB)