For this month’s next review for Genre Grandeur – Movies About Musicians, here’s a review of Mr. Holland’s Opus (1995) by Me.

Thanks again to Debbie at Moon in Gemini for choosing this month’s genre.

Try to think out of the box! Great choice Quiggy! 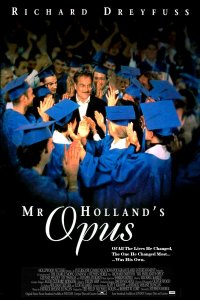 “You work for 30 years because you think that what you do makes a difference, you think it matters to people, but then you wake up one morning and find out, well no, you’ve made a little error there, you’re expendable. I should be laughing.” – Glenn Holland

Brief Synopsis – The life of a music teacher who only started the job part time in order to work on his music and how hos life canges over the course of the next 35 years.

My Take on it – When Debbie chose this genre for this months theme, I was actually quite excited, yet also a bit disappointed since I had three films in mind as my favorite.

I therefore decided that instead of doing just one reviews, I would watch and review all  three of them.

Finally, I go with my absolute favorite of the 3 and that largely has to do with the fact that this film feels so personal to me.

This is an amazing film that shows the path that life can take us especially when we are not expecting it to.

The music is superbly chosen and this soundtrack is one I can listen to over and over.

The score by Michael Kamen is amazing and helps accentuate the impactfulness of the story itself.

The way that they incorporate the theme into the story is done really well and we get bits and pieces of it throughout the film until it all comes together at the end … like in life itself.

The choice to show numerous episodes over the course of his life as a teacher works really well to give us a clear picture of the kind of changes the characters has gone through over the years as he evolves as the times and students change along with it.

Richard Dreyfuss is super in the title role and garnered an Oscar nomination for Best Actor for this performance.

The supporting cast is also great and they help keep the story interesting throughout.

Olympia Dukakis, William H. Macy, Terrance Howard, Jay Thomas, Alicia Witt, Jean Louise Kelly, Balthazar Getty, Joanna Gleason and Glenne Hadley all add so much to the story and the experiences of the main character as we get the feeling that they are all people who are familiar with one another for so many years and have important impact on one another when they interact with one another.

This is a film that always makes me cry especially during two sequences – Beautiful Boy and the Finale and they always are tears of joy because we get to see what this man ends up doing with the life he is given.

This is a film that is very relatable to just about anyone because none of know 100% what path our lives will follow and as things move along and life changes things we all still have the hope that in the end, we will be able to look back on the life we led and know that we somehow had a positive influence along the way.

This is one of my favorite films and even just writing about it now, it makes me want to watch it again real soon.

Bottom Line – Amazing movie that shows how the path of life can take you places you never expected.  The music is exquisite and Michael Kamen does an amazing job with the theme music which is also part of the work that the characters works on over the years. The choice to show a few episodes over the course of his life works really well and we get a clear picture of who he is and what kind of teacher and man he turns into as we get to see him evolve over the years. Each vignette does what it should and it helps us understand things so much better. Dreyfuss is superb in the lead and was quite deserving of getting an Oscar nomination for Lead Actor for this performance. The supporting cast is also great and they all give great performances; Dukakis, Macy, Howard, Thomas, Witt, Kelly, Getty and Headley all embody important figures in his life and we get that feeling when he interacts with them.  This film always makes me cry during two sequences (Beautiful Boy and the Finale) and they are always tears of joy because we get to see what this man does with the life he leads.  The way that this film makes itself so relatable to just about anyone is great because none of us ever know the path we will follow and as life moves along things change and we all hope that in the end, we can look back and know that we made some kind of difference along the way. One of my favorite films and just thinking about it now, I want to see it yet again. Highly Highly Recommended!

MovieRob’s Favorite Trivia – Although his character Glenn Holland uses rock and pop music in class (and at one point says he “loves it” ) and is also a fan of jazz, Richard Dreyfuss confessed on Inside the Actors Studio that he has always hated Rock and Roll and the one sound that he hates most is “the electric guitar.” (From IMDB)