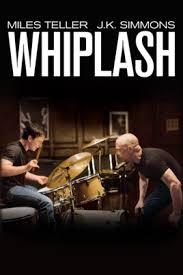 For this month’s first review for Genre Grandeur – Movies About Musicians, here’s a review of Whiplash (2004) by Michael Eddy.

Thanks again to Debbie at Moon in Gemini for choosing this month’s genre.

Try to think out of the box! Great choice Quiggy!

A stunning film – with some stand out (and Oscar winning) performances. Miles Teller is excellent as the aspiring drummer with issues at home with  his father, who enrolls in an elite music academy to be a drummer. He crosses paths with a drill sergeant nightmare of an instructor – played balls out and superbly by JK Simmons – who does not suffer fools gladly on his quest to field the best jazz band possible. He is relentless and overbearing and profane and over the top with his “students” – playing them off of one another as they “play” for their lives in his ensemble. The music is great and the editing of the practice sequences and “competitions” is thrilling and adrenalin pumping. It is a story of both talent and obsession and where those lines meet and intersect and the pain and joy caused depending on which side of the line you land. Brilliantly written and directed by Damien Chazzelle (of this year’s “First Man”). Before the movie was half way over – I knew that Simmons would not only be nominated for an Oscar – but win it. I ain’t that smart – this one was easy.