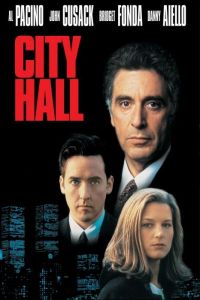 “You want an answer? Okay, pappy, think of it as colors. There’s black, and there’s white, and in between is mostly gray. That’s us. Now gray is a tough color, because it’s not as simple as black and white – and for the media, certainly not as interesting. But… it’s what we are.” – Mayor John Pappas

Brief Synopsis – An advisor to the mayor tries to figure out what caused the accidental death of a young boy following a police shootout in New York.

My Take on it – This is a film that has an interesting premise and starts off well and then loses its steam fairly quickly.

Despite its stellar cast of John Cusack, Bridget Fonda, Al Pacino, Danny Aiello and Martin Landau, things just don’t work as well as one could hope and all of them feel quite wasted in these roles.

None of the characters seems developed enough and they all are caricatures and stereotypes that give the viewer no reason to honestly care about what will happen to them over the course of the film.

The story itself loses interest too soon and it feels as if it jumps limps along afterwards in its search to make things have far reaching ripples due to political corruption and favors which feels too contrived.

Bottom Line – Very mediocre film that starts off really well but loses most of its steam pretty quickly.  The story doesn’t manage to stay interesting and feels as if it begins to limp along part of the way through just to find a way to shed light on how far reaching political corruption and favors could possibly reach. Pacino, Cusack, Aiello, Fonda and Landau all feel completely wasted in this film because their characters aren’t fleshed out nearly enough which makes them all seem like caricatures and stereotypes instead of powerful three dimensional figures.