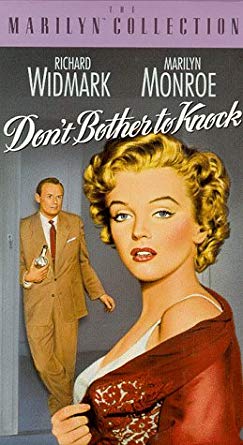 Brief Synopsis – An airline pilot rebounding from a past relationship falls for a babysitter pretending to be an heiress who is staying in the hotel.

My Take on it – This is another film that I knew absolutely nothing about before watching it and was a bit disappointed that it wasn’t more interesting than the premise makes it seem to be.

The story itself is presented in quite a lackluster fashion and the two leads Richard Widmark and Marilyn Monroe both feel completely wasted in these roles since they are both much better actors than one would presume from watching them here.

The plot of the film moves along quite slowly and dips into some strange directions along the way that also takes away from any thrilling aspects that could be used.

Once things begin to be revealed towards the end, it raises the storyline a bit higher but unfortunately its too little too late and instead leaves things definitely lacking because they feel too forced despite the refershing feeling that things have now been explained properly to the viewer.

The choice to show this in real time actually works to its advantage and we get to see things exactly as the characters do.

The way that the characters interact throughout the film doesn’t work well enough because they all seem to lack real chemistry which would make things feel much more realistic.

Bottom Line – Interesting idea that comes across pretty lackluster. Widmark and Monroe are both better actors than this film makes them out to be and are both somewhat wasted in this mediocre film. The plot itself moves in some strange directions and when everything is finally revealed it’s refreshing to know but still feel a bit too forced.  The characters lack any real chemistry which takes away from the realism of the story despite the wise choice to show things in real time because it helps give us a similar perspective to the story as the characters themselves do.

MovieRob’s Favorite Trivia – The events in the film take place in real-time.  (From IMDB)