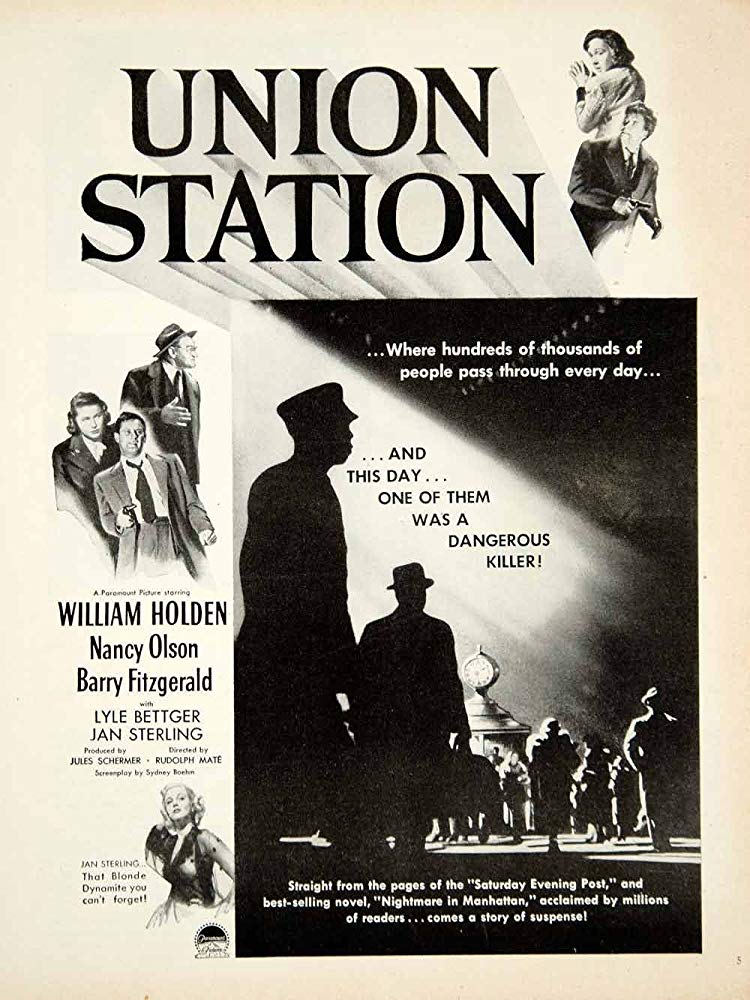 “[to Joyce] If anyone asks me to stick my neck out, I want to know who’s doing the askin’.” – Lt. William Calhoun

Brief Synopsis – After noticing a suspicious man on a train, a young woman alerts the police that something is wrong and this causes her to be drawn into a kidnapping caper.

My Take on it – This is a film that I knew nothing about before seeing it and was quite happy to see that it starred William Holden and Barry Fitzgerald in prominent roles.

This is a film that is quite thrilling and manages to work on numerous levels to keep the suspense of it all quite high.

The plot itself is a relatively simple one, yet they find ways to keep things interesting as the pace of the story gains momentum.

The cats is great with Holden, Fitzgerald and Nancy Olson managing to bring us characters that feel so genuine and real which helps us sympathize with everything that they must deal with along the way.

The use of minimal locations works to this film’s advantage and it helps add to to the claustrophobic feeling of the story as the tension level keeps rising as things move along.

This film is a perfect example of a quality crime thriller that doesn’t need to rely on special effects or even a big budget in order to make the story entertaining and suspenseful that current filmmakers should take notice of.

Bottom Line – Thrilling film that works on numerous levels. The way that they keep the suspense going is great especially given the relatively simple plot. Amazing cast led by Holden, Fitzgerald and Olson who make us truly believe their characters and we can easily sympathize with everything that they must undertake along the way.  They use minimal locations quite well here and that also helps add to the claustrophobic feeling of the story as things get more and more tense along the way. Recommended!

MovieRob’s Favorite Trivia – There were two former mayors of Mayberry–the setting of The Andy Griffith Show (1960)–in this movie: Parley Baer (Mayberry Mayor Stoner) was a cop and Dick Elliott (Mayberry Mayor Pike) was a powerhouse workman. (From IMDB)