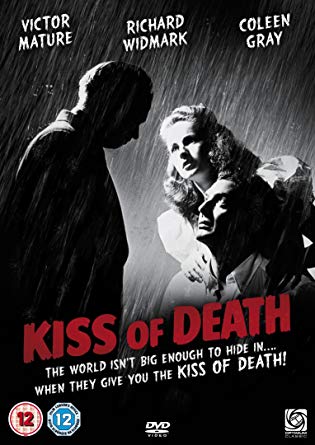 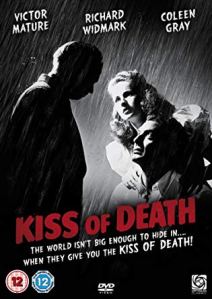 “I wouldn’t give you the skin off a grape.” – Tommy Udo

Brief Synopsis – A small time criminal decides to turn over a new leaf in order to have a better relationship with his family despite the fact that criminals he wronged in the past are trying to find him.

My Take on it – This is a film that I knew very little about before watching it, but the premise itself was quite intriguing.

Despite the fact that there were many censorship laws in the 1940’s, that hampered what could be said or depicted in films like this, they manage to do a nice job telling this story.

The cast is quite good and Victor Mature gives one of hos best performances of his career with this role.

Richard Widmark also does a wonderful job as the villain and is quite menacing throughout.

He was nominated for an Oscar for Best Supporting Actor for his work on this film.

The thing I really enjoyed about this film is that it starts off seemingly very predictable in the way the story will unfold but due to some great twists and turns, they still manage to keep surprising along the way which sets it apart from many other films of this genre at the time.

Bottom Line – Works quite well given the obvious restraint of the time when presenting such a story. The cast is great and Mature probably was never better than he was in this role. Widmark is quite menacing in the role of the villain here and was able to earn an Oscar nomination for Best Supporting Actor for his performance here.  The story seems predictable, but the various twists and turns along the way help set it apart from many other films of the genre. Recommended!

MovieRob’s Favorite Trivia – Originally, Patricia Morison played Victor Mature’s wife, who is attacked and raped by a gangster who is supposed to be watching out for her while Mature is in prison, and afterwards commits suicide by sticking her head in the kitchen oven and turning on the gas. Both scenes were cut from the original print at the insistence of the censors, who wanted no depiction of either a rape or a suicide, so she does not appear in the film at all. Mention is made later in the film about Mature’s wife’s suicide and a now obscure reference is made by Nettie that the unseen gangster Rizzo contributed to the wife’s downfall. (From IMDB)