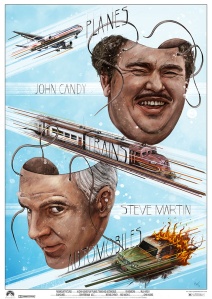 “Simple. There’s no way on earth we’re going to get out of here tonight. We’d have more luck playing pickup sticks with our butt-cheeks than we will getting a flight out of here before daybreak.”- Del

Brief Synopsis – Two businessmen try to get from New York to Chicago anyway they can in the days before Thanksgiving.

My Take on it – This film has been among my favorites for so many years and I can watch it over and over and never get bored yet will still laugh uncontrollably each and every time.

This film works on so many levels and is 90 minutes of pure comedy.

The script is expertly written by John Hughes but the scenarios and characters work largely due to the amazing chemistry that Steve Martin and John Candy have throughout.

I highly doubt that many other actors could embody these characters as well as the two of them manage.

They know how to work off one another so well and their differences make things so enjoyable and hilarious to watch.

Sometimes one might think that this film goes over the top too often with the scenarios that they throw at the characters but watching the way each of them reacts so diversely to each event helps make this film work so superbly and adds to the hilarity of it all.

There are so many scenes that are continuously funny that its sometimes hard to stop laughing as we are given a barrage of funny situations one after another.

This film is not just a comedy tho and they find a way to add another level to it all which gives so much meaning and poignancy to it all.

Some of the dramatic scenes are quite heartfelt and this helps build up any kind of affection the viewer may have for the characters.

The final scene of the movie is quite moving and could lead to some tears being shed because it works so beautifully as the cap of such a film.

Bottom Line – Hilarious film that works on so many levels. The script is superbly written by Hughes, but the characters work so well largely due to the superb performances by Martin and Candy who have amazing chemistry together. This film might seem like too much but each of the scenarios that these characters are faced with are perfectly done and we get to see the diverse reactions of both of them to each situation which just adds to the hilarity of it all. They also find a way to make this film meaningful and poignant by adding it some great dramatic scenes that allow the viewer to care so much about these characters that the final scene might even be able to bring some tears. Highly Highly Recommended!

MovieRob’s Favorite Trivia –  John Hughes, in an interview on the “Those Aren’t Pillows” DVD, said he was inspired to write the film’s story after an actual flight from New York to Chicago he was on, was diverted to Wichita, Kansas, thus taking him five days to get home. (From IMDB)