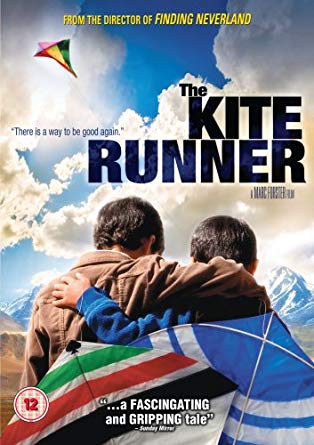 “There is only one sin, only one. And that is theft. Every other sin is a variation of theft… When you kill a man, you steal a life. You steal his wife’s right to a husband, rob his children of a father. When you tell a lie, you steal someone’s right to the truth. When you cheat, you steal the right to fairness.” – Baba

Brief Synopsis – Twenty years after fleeing his homeland of Afghanistan, a young writer returns in order to try and help the son of a dear friend of his childhood.

My Take on it – This is a film that I recall hearing so much hype about when it came out since it was based on a best selling novel.

They manage to really bring forth the idea of the ways that someone may feel compelled to repay unpaid debts of ones childhood.

The story is told in a way that works quite well with the present being the main focus yet they give us very imperative and interesting flashbacks that explain the various events that occurred that caused everything to get to where the characters are now.

This is a film that was much more fascinating when I saw it for the first time 11 years ago and it doesn’t manage to retain its impact upon a rewatch.

Although I’ve never read the novel this is based on, I’m sure that the novel is much more compelling because they have the added advantage of explaining so much more about the events being shown especially when dealing with the laws of Taliban regime that was in power during the time that this story takes place which would be reason enough to terrify the main character from doing many things that he does.

Bottom Line – Interesting idea that deals with repaying the debts of one’s youth. The way that this story is told works because we get to see the present along with flashbacks to the past which help explain the events that led up to what is now happening. This was a more fascinating film the first time I saw it 11 years ago, and it loses much of its impact upon rewatching it.  The book is probably much better since it probably gives much more explanations of things along the way especially about why he character should be so fearsome of the Taliban regime that was in power at the time of this story. Recommended!

MovieRob’s Favorite Trivia – Author Khaled Hosseini describes the filming (in Kashgar, China) of the Kabul kite tournament scenes: “There weren’t actually any kites in the sky. We were just kind of looking up at these strings going up to these cables and hanging from the other side there were water bottles to give the string a sense of tension.” To which director Marc Forster adds “Yes, because we had no wind.” CG kites were added in post-production. (From IMDB)