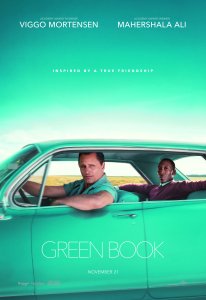 Brief Synopsis – A New York city bouncer gets a temporary job driving a Colored musician across the South in the 1960’s.

My Take on it – This is a film that has gotten quite a lot of hype during the awards season and I think that from an acting perspective that is quite warranted, but I’m not quite sold on the over story part of it.

The premise of this film works much better than I had expected and I originally envisioned an updated version of Driving Miss Daisy (1989) for the 21st Century.

Instead, we get a story that borders on poignancy and has two great lead characters who are developed exceptionally well and each have a great character arc over the course of the story.

Both Viggo Mortensen and Mahershala Ali are superb in these roles and they both transform themselves into these characters so well.

The story line is quite predictable and it’s quite easy to see where things will eventually lead, yet this film is more about the journey to that point than about the destination itself.

The story does a great job transporting us to the early 1960’s and we get a clear and vivid picture of what life was like both in the North and South nearly a Century after the Emancipation Act especially from the perspective of racial relations on both fronts.

Bottom Line – Interesting premise that works much better than I had expected it to. I had envisioned a Driving Miss Daisy (1989) for the 21st Century, but they manage to give us some great characters who are developed quite well over the course of the film. Mortensen and Ali are both superb in this film and even though it is quite clear where the story is heading, it’s still quite a pleasure watching them take the journey to that place. The story does a wonderful job transporting us back the the early 1960’s and we get to see how racial relations were viewed both in the North and the South nearly a century after the Emancipation Act. Quite enjoyable, but not one of the very best films of the year. Recommended!

MovieRob’s Favorite Trivia – Prior to filming, Viggo Mortensen was invited to meet Nick Vallelonga’s family over a six-hour dinner. He said, “It almost destroyed me because I hadn’t gained the weight yet – I hadn’t expanded my stomach… It was almost lethal…” When the family assumed he was declining more helpings was because he didn’t like the food, he felt compelled to finish his plate. But every time he finished a plate, they brought another one. “I said goodbye. We did a picture together. I limped to my rental car and I made a big show of ‘oh, I’m driving back to Manhattan!’ And I drove around the corner, parked the car, leaned my seat back, undid my belt and lay there for an hour, just groaning.” (From IMDB)