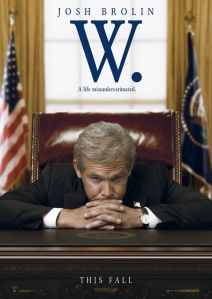 “[on the phone with George W. after he gets arrested] My father would’ve kicked the living crap out of me if I ended up where you are now, Junior.” – George H.W. Bush

Brief Synopsis – A look at the life and rise to the Presidency of George W. Bush.

My Take on it – This is a film that takes the real life events of one of the most controversial recent Presidents and presents it in quite a cynical way, yet it still can be viewed as being a realistic portrayal of it all.

Oliver Stone is a great director and he manages to present the way that W. rose to the Presidency in an understandable and plausible fashion.

Many may see this film as a satire, but it still comes across as being quite realistic throughout.

The cast of this film is superb and they are able to cast so many actors in pivotal roles who resemble their real life counterparts in mannerisms, speech and physical appearances.

Josh Brolin is superbly cast in the lead and he embodies the W. we all know.

The story is told quite succinctly and they manage to keep the pacing at a high level which only adds to the intensity of the story being told here.

Unlike in some of Stone’s other biopics, this one doesn’t feel as if it drags on at all and is successful in staying interesting the whole way through.

Bottom Line – Cynical portrayal of the life of the 43rd President that works really well. Stone actually does a fine job here presented the way he rose to the Presidency and although many can possibly see this film as a satire, it still comes across as being realistic the whole way.  The cast is superb and many of the actors used here very closely resemble their true life counterparts.  Brolin is superb in the lead and gives off the impression that he really is W. The story is told succinctly and unlike in some other biopics that Stone has done, nothing feels dragged out here and it remains interesting throughout.  Recommended!

MovieRob’s Favorite Trivia – Oliver Stone and Josh Brolin both later claimed that they were informed by sources that President Bill Clinton had personally handed President George W. Bush a DVD of the film, assuring Bush that he’d enjoy it. (From IMDB)