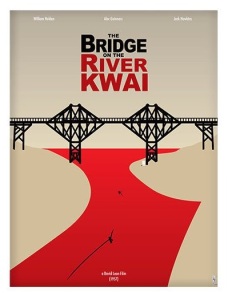 “You make me sick with your heroics! There’s a stench of death about you. You carry it in your pack like the plague. Explosives and L-pills – they go well together, don’t they? And with you it’s just one thing or the other: destroy a bridge or destroy yourself. This is just a game, this war! You and Colonel Nicholson, you’re two of a kind, crazy with courage. For what? How to die like a gentleman, how to die by the rules – when the only important thing is how to live like a human being!… I’m not going to leave you here to die, Warden, because I don’t care about your bridge and I don’t care about your rules. If we go on, we go on together” – Commander Shears

Brief Synopsis – After surrendering to the Japanese during World War II, a battalion of British soldiers area tasked with building a bridge for the enemy but the Colonel commanding the prisoners clashes with the Prison Camp Commander which cases many problems. 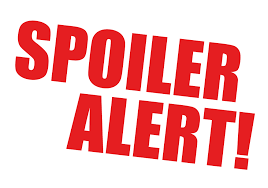 If you have never seen this movie, I urge you to stop reading this post, read my three original non-spoiler reviews (linked Here, Here and Here), watch the movie and finally after you’ve seen it, absorbed it and even cheered a bit (I did every time that I’ve watched it) then come back here for a review and analysis full of spoilers.

This is a film that I saw as a kid and it’s still so fascinating for me to watch it all unfold no matter how many tiems that I’ve seen it.

David Lean was a master of creating Epic movies and this is IMHO his finest [yes, even better than Lawrence of Arabia (1962)].

The story does a great job depicting the conditions that these soldiers must endure while being held captive in the Jungles of Asia.

At first, Commander Shears (played by William Holden) may seen a bit out of place among the various British soldiers in the camp, but as things move along, we understand what kind of man he truly is.

He is able to improvise along the way and bend the rules in order to survive no matter the cost.

He is a man who does all he can for himself just to survive and although it isn’t explicitly described, we know that he isn’t necessarily a man who will help others as much as he will himself.

His escape from the prison camp works because he is with two others who get caught and killed yet despite getting wounded he manages to get free and make his way eventually to Allied lines.

The other main character is Colonel Nicholson (played by Alec Guinness) who is a proper British soldier who wants to live life exactly by the rules of conduct of war in order to ensure that he and his men can hold on to their honor at all cost.

His adamant stance that the Officers under his command will not be given manual labor causes much friction between himself and the Japanese Prison commander Saito (played by Sessue Hayakawa).

These two men are each trying to show everyone around them that they are in complete control of everything which allows them to be as stubborn as possible.

The way that they show these confrontations between the two of them are superb and we can feel the tension between them throughout.

Once Nicholson begins to get his way, we see a transformation from the feelings of a prisoner to someone who has a task he wishes to accomplish for the sake of all mankind.

He begins to lose sight of the fact that he is working for the enemy and eventually even goes against his own beliefs by convincing his officers to also do manual labor (despite the fact that he was adamant against it when it was Saito’s demand).

The look on his face when he realizes at the end what he has become is priceless and for that scene alone Guinness deserved winning the Oscar for Best Actor for this role.

Shears also changes during the course of the film and we see that despite the fact that he proclaims so often that he is only on the mission because he is being forced to do it, he still makes the decision to cross the river in order to try and stop Nicholson from ruining the whole destruction of the bridge which ultimately causes both his death and Nicholson’s.

His last act in life was definitely a selfless one.

The fact that this film allows the main characters to die is great because it turns the whole story into something so much more realistic because it isn’t a story about a superhero, but rather about soldiers doing their duty for their country and for the side of good and sometimes there is a cost for such acts of bravery.

This is a film that I can watch over and over again and never get bored of and even though I just watched it, I know I can watch it again soon and still enjoy it so much once again.

MovieRob’s Favorite Trivia –  William Holden, then a major star, was brought into the project to provide “box-office appeal” after Cary Grant turned down the role. He received three hundred thousand dollars up front, and was guaranteed a ten percent share of the profits, to be paid at the rate of fifty thousand dollars a year. This is one reason why Holden sued to stop the first American television showing of the movie in 1966, claiming it would hurt future box-office receipts, on which he was dependent (the lawsuit was unsuccessful). Because the movie made so much money, his shares eventually accumulated to the point where the studio was making more off of the interest on the unpaid balance than Holden was paid per year. A settlement was reached where Holden was paid a lump sum, and any future payments were willed to a motion picture relief fund. (From IMDB)