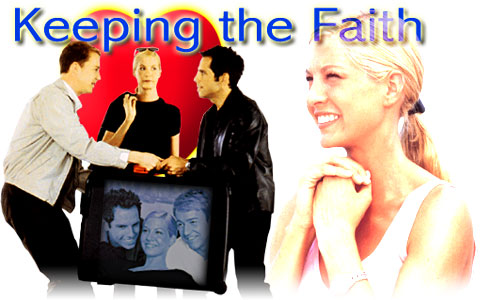 “What do you want me to do? Flagellate myself? Jews don’t do that, we plant trees.” – Rabbi Jake Schram

Brief Synopsis – A priest and a rabbi who are best friends reconnect with a childhood friend of theirs who adds to the already complex relationship between the two since they both start to have romantic feelings for her.

My Take on it – This is a film that is quite fun because it manages to take the age old joke about a Priest and a Rabbi and finds a way to expand the idea in a clever way while also adding a heartwarming romantic story that works really well.

Edward Norton and Ben Stiller are perfectly cast in the lead roles and they have amazing chemistry together.

They play these roles in a way that it seems as if these characters truly have been close for decades and it shows throughout.

Jenna Elfman is also perfect as the female lead because she adds so much energy to the situation which is quite complex yet it still keeps things interesting on numerous levels.

Personally, I’m a religious person myself and was able to connect to this film from various angles.

I was able to relate to many of the situations and conflicts that these characters face throughout and loved the way that they try to tackle some of these issues.

They do a wonderful job presenting the issues of faith in things that happen in the world and looks at how things are run both from above and on Earth itself when it comes to issues dealing with moving forward despite various hurdles along the way.

This is the first (and so far only) film that Edward Norton has directed and he shows how much potential he has as a director with his debut here and it’s quite unfortunate that he has yet to direct another film in the nearly two decades since this film came out.

Bottom Line – Fun film that takes the age old joke of a Rabbi and a Priest and bring a clever and heartwarming romantic story to the fold. Norton and Stiller have amazing chemistry together and they play these roles so well because we feel as if they have truly been close friends for so many years.  Elfman is perfect as the female lead and adds some much energy to the already complex situations while still making it work on numerous levels.  As a religious person myself, I could relate to many of things described in the film especially those dealing with having faith in the world and how things are run both from above and also here on Earth. This film isn’t perfect, but it does so many things right in how it presents the various scenarios.  This is the first (and so far only) film directed by Edward Norton and its easy to see how great a Director he can be and it’s unfortunate that in the nearly twenty years since this film came out, he hasn’t yet continued on this track. Recommended!

MovieRob’s Favorite Trivia – Edward Norton turned down a leading part in U-571 (2000) in order to make his directorial debut. (From IMDB)