This is the 7th of 10 films that I was “forced” to watch by my fellow bloggers who participated in my 4800th review Contest last December.  This movie was the 2nd of 2 films chosen by Carl of Listening to Film

Tnx for the suggestion.  Let’s see what I thought of it…. 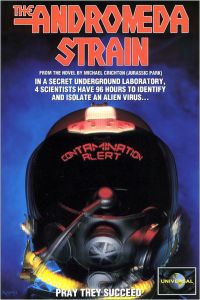 “Most of them died instantly, but a few had time to go quietly nuts.” – Dr. Mark Hall

Brief Synopsis – After a satellite crashes on Earth and a virus from space causes the death of a small town, an elite team of scientists are given the task of finding out how to stop the deadly spread of the virus.

My Take on it – As a fan of Michael Crichton stories, I was quite intrigued to see this film once it was suggested by Carl because it’s among his films that I never saw beforehand.

They do a wonderful job keeping this story thrilling the whole time and that is helped by the fact that they give us just a small taste of the potential horrors that such an event could bring about.

Unknown space has many potential dangers and this film gives us the ability to learn so much about how science can try to find a way to combat such infections if done strategically and methodologically.

Obviously, technologies have changed so much in the nearly 50 years since this film was made and some of the computers and devices used here look archaic and silly especially when comparing them to modern devices.

Despite this tho, this film explains things so thoroughly that it helps make it still seem so plausible and timeless an event and that makes this story work so well as a thriller that could be plausible and realistic.

The choice to have the cast filled with mostly unknown actors also works well in establishing each of them as true scientific geniuses of their fields instead of seeing them as actors portraying such characters.

I’m now quite interested in seeing the remake of this film to see how they deal with these issues from a more modern viewpoint.

Bottom Line – Such a thrilling film that gives us just a taste of what kind of horrors could be found in space yet gives us the ability to learn about the various scientific ways that it might be possible to contain and stop the spread of a virus like this.  Despite the fact that the technologies used here seem so silly compared to what we have now, it still works quite well because of the way they explain things to us along the way.  Liked the fact that the cast is largely unknown because it helps give the characters more of a feeling as if they are the actual scientists instead of just actors playing those roles. Highly Recommended!

MovieRob’s Favorite Trivia – Michael Crichton was invited to take a tour of Universal Studios during the production of this film. His guide was none other than Steven Spielberg, who went on to adapt Crichton’s most successful novel, Jurassic Park (1993). (From IMDB)